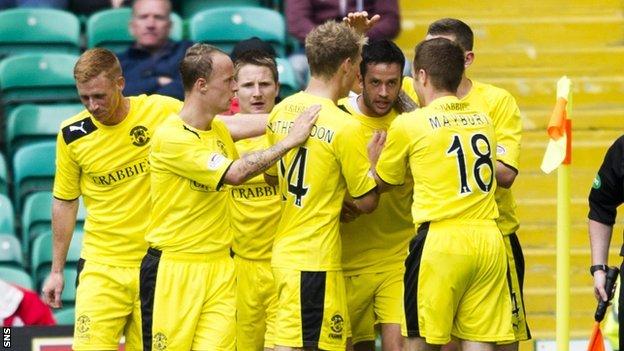 Pat Fenlon is urging his Hibernian players not to get carried away after their impressive comeback at Celtic for a 2-2 draw left them joint top of the Scottish Premier League.

"It's important we focus on the next job," the Hibs boss told BBC Scotland.

"We've got to change the mindset. When we do lose games and people knock us, we've got to take that.

Tim Clancy and Paul Cairney scored second-half goals at Celtic Park to restore parity after Mikael Lustig and a James McPake own goal had twice put the hosts in front.

The hard-fought point was welcomed by Fenlon, especially after Hibs were knocked out of the Scottish Communities League Cup by Queen of the South in midweek.

There is spirit about this group. That is the type of player that we have brought into the club, ones who are willing to put a fight on

"We showed great character and great guts but a lot of decent football as well," added the Irishman.

"In the second half we passed the ball quite well at times but in the first half we forced it sometimes - we should have kept it longer.

"We might have nicked it in the end. I am very proud of the players. I thought they worked extremely hard."

Hibs are level with Celtic on eight points in the SPL but have played five games to the champions' four.

And Fenlon added: "The league form has been quite decent since the first day of the season, that's why Tuesday was so annoying.

"The players know that themselves. We dropped our standards.

"There is spirit about this group. That is the type of player that we have brought into the club, ones who are willing to put a fight on.

"We've changed a lot of it around and we've brought in some decent players."