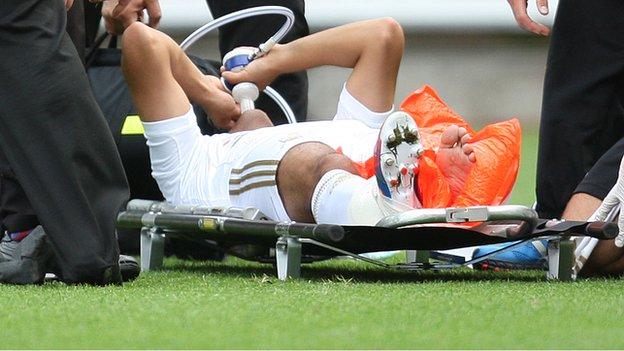 Wales defender Neil Taylor is expected to miss the rest of the season after fracturing an ankle in Swansea City's 2-2 draw with Sunderland on Saturday.

Taylor, 23, underwent surgery on multiple fractures, but the club's head physotherapist Kate Rees says he is expected to make a full recovery.

Rees said: "The surgeons worked hard on Neil's injury... and did a very good job.

"He is comfortable and the surgeons are happy with the operations."

She added: "While he should make a full recovery, the extent of the injury means Neil is likely to miss the rest of the season.''

Taylor was injured after falling awkwardly in the first half at the Liberty Stadium.

His foot was trapped underneath him as he fell to the ground, taking the full weight of Sunderland's Craig Gardner on the way down.

Taylor immediately summoned the Swansea medical staff as he held his left ankle in agony after just 15 minutes of the match.

"When you have injuries like that it is normally very violent, but this was not violent," said manager Michael Laudrup.

"It was even a free-kick against us.

"Sometimes these injuries happen in strange ways, you don't think anything is wrong and then there is ligament damage or something like that, it is very sad.

"But you see things that are much more violent than that - this was not violent, it was unlucky.

"He was very unlucky to fall in a bad way, you can't blame the Sunderland player for that."

As well as missing a significant part of Swansea's season, Taylor will be unavilable for most of Wales' 2014 World Cup qualifying campaign, which starts against Belgium on Friday.

Taylor impressed for Team GB at the 2012 London Olympic Games and was expected to play a big part in Wales boss Chris Coleman's plans.

Teenager Ben Davies was Taylor's replacement for Swansea, making an assured Premier League debut as Laudrup's side twice hit back to secure a draw.