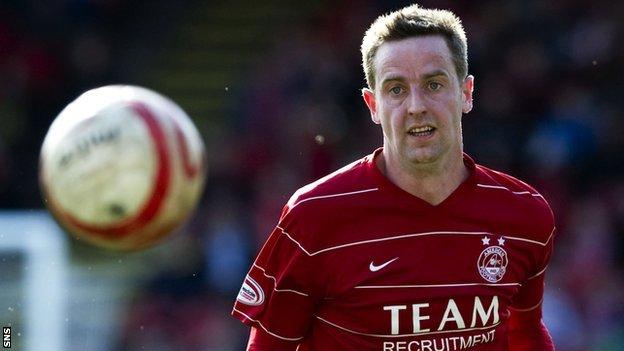 Manager Steve Lomas had been keen to add a greater striking threat to Saints and will hope the 29-year-old Scot will boost the Perth side's low goals tally.

MacLean's most recent spell in Scotland was with Aberdeen, whom he joined on loan from Plymouth in season 2009-10.

Lomas told BBC Scotland after the 0-0 draw with Dundee United he is also hoping to sign another free agent, midfielder Mark Kerr.

However, the move depends on funds being available.

MacLean and Kerr, 30, played together at Pittodrie, with the latter looking for a club after leaving Dunfermline at the end of last season.

The capture of former Rangers forward MacLean was announced shortly after St Johnstone picked up only their second point of the season against Tayside rivals United.

The Perth club remain second-bottom of the Scottish Premier League with only two goals in five matches.

"The budget has been slashed, so whether or not the chairman can find anything extra remains to be seen," said Lomas.

"We've let a couple go in Stevie May and Sean Higgins.

"So, we're hopeful, but I'll speak to the chairman and see where we're at."

Lomas insisted he was satisfied with his team's efforts against United.

"We cut out the individual mistakes that hurt us last week against Hibs."

The manager admitted his side need more of a cutting edge, with Nigel Hasselbaink in particular missing a clear-cut opportunity.

"You'd hope that we'd take them and I think it probably would have been no more than we deserved," added Lomas.

"The only thing that's missing is the finishing.

"I've said to the lads that if they continue doing the same things it will turn for us. I've no doubt."