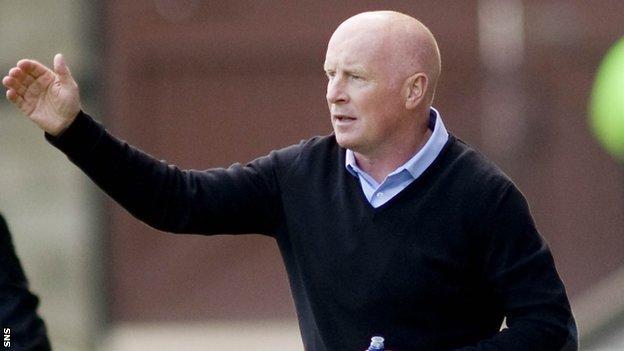 Speaking after his side's 0-0 draw with St Johnstone at McDiarmid Park, Houston dismissed the Yorkshire club's offer as a derisory one.

"I think it was a disgrace the offer Huddersfield put in," Houston said.

"It just shows what they think about the players up here.

"It makes me wonder why they think they can get £8m for one player that they think's their best player.

"And for two of our best players, two players I think are future international players, they want them for £1.25m.

"I just laugh at that, it's an absolute joke."

Houston also suggested that the players would benefit by staying at Tannadice for the present.

"Johnny Russell's not at the level David Goodwillie was when he left," he added.

"Johnny was in no rush to leave.

"However, if something came up and trebled your wages, then you could understand.

"However, it never came in, it never reached what we think he's worth, and Johnny's more than delighted because he still sees himself as developing as a player."

The United manager said that losing Mackay-Steven to injury had caused his side creative problems again.

"If you take a creative player like Gary Mackay-Steven out, I think it shows you how much we miss," said Houston, who also admitted that the player's injury was worse than originally anticipated.

"I think he'll be out for about six weeks minimum now.

"There's a wee bit more work to be done than the scan initially showed.

"I think you'll agree we miss a wee spark from him."

Despite St Johnstone's poor start to the season, Houston said he was satisfied to leave Perth with a point.

"I don't think it was a classic by any means, but sometimes derbies are like that," he said.

"It's not a disaster to draw 0-0 away to St Johnstone.

"I'll take the point in a game where we never got anywhere near our best."