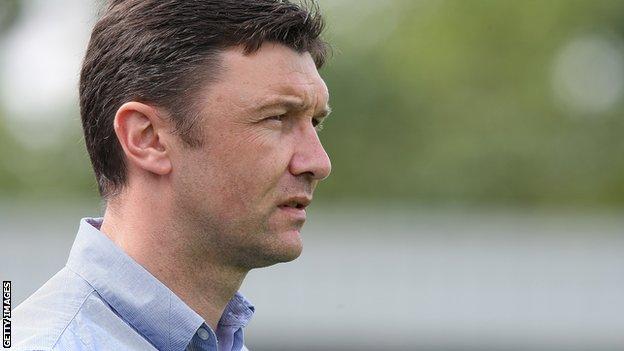 The former Northampton boss arrived at Steel Park in May but the Steelmen have yet to win a point this season.

Chairman Kevin Ingram told BBC Radio Northampton: "I think, in the main, we have got the players but I don't think we're getting the most out of them.

"I gave my opinion to Ian and he's resigned. We'll take stock over the weekend about what we want to do."

The resignation, which came after a 5-4 defeat at home by Bradford Park Avenue, led to Chris Plummer taking over in a caretaker capacity.

Sampson declined to be interviewed but did cite 'irreconcilable differences' with the chairman as the reason for his departure.

"The budget is what the budget is," said Ingram. "It's not going to be increased.

"We're all about sustainability. We've got a good enough squad who are capable of climbing the league.

"I've spoken to the players and they're all very disappointed with themselves because they feel that they have let us down.

"Let's see what reaction we get."

Reacting to the news of Sampson's departure, club captain Paul Malone said: "It's a shock. We didn't see it coming.

"It's been shocking in the first five games and embarrassing for everyone involved - 18 goals [conceded] in five games is pathetic.

"It' s a tough league and if we're going to crumble, it'll be a long season. It's about character and seeing who's going to stand up and be counted."

Striker Leon McKenzie said he would not quit the club despite Sampson's exit, with the pair having previously worked together at Northampton.

"I've come in here to try to help the boys," said McKenzie.

"I've got a good relationship with Chris Plummer as well and I'm not looking to walk out, regardless of the situation."