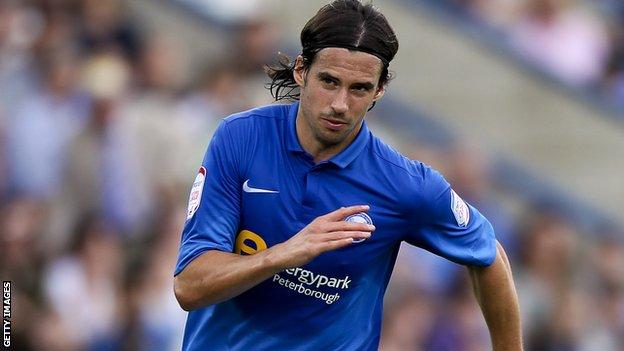 Ipswich signed Boyd's former team-mate Paul Taylor and were believed to be interested in the 26-year-old as well.

Fry told BBC Radio Suffolk they would allow Boyd to move when the loan window opens later this month if Ipswich agree to sign him permanently in January.

"We'd definitely do that - it's up to Ipswich to convince George," he said.

Boyd remains on the transfer list at London Road but remains a key member of Darren Ferguson's squad and played in Saturday's 1-0 defeat at Birmingham.

The Scotland B international, who is the highest-paid player in Peterborough's history, turned down a new contract this summer.

"Like Taylor, we sat George down in the summer and offered him another lucrative contract and a testimonial at the end of it," Fry continued

"But George said 'no disrespect to Peterborough, but I want to join a bigger club'. George Boyd owes us nothing.

"If you look at all the stats, he's in the top five for creating goals in the Championship, he also scores a fair quota, he's been absolutely magnificent for us but the wages he's on, I don't think Ipswich can quite get there.

"That was a stumbling block but he is an unbelievable player and if Ipswich did get him, he would be sensational [for them].

Boyd joined Posh from Stevenage in 2007 and has played more than 200 games for the club either side of a brief loan spell at Nottingham Forest two years ago.