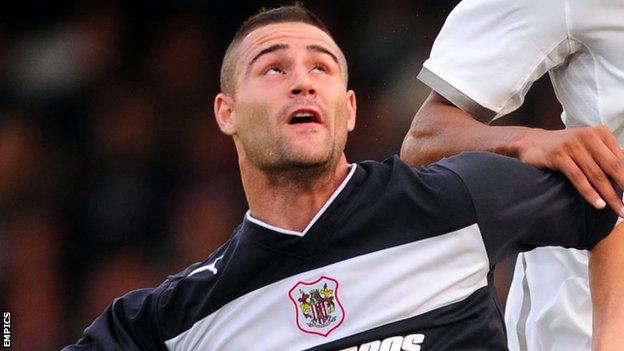 Substitute Marcus Haber headed his first goal for Stevenage as they came from behind to leave relegated Coventry City still without a win in League One.

Coventry took the lead on 10 minutes when David McGoldrick turned sharply to curl home from 25 yards.

But either side of the Sky Blues having goals disallowed, Stevenage equalised when Robin Shroot's shot was allowed to stand despite home appeals for offside.

And Haber powered home from close range on 71 minutes to snatch three points.

Unbeaten Stevenage climb to third in the table, while managerless Coventry stand 19th, with just three points from their first five games.

And, after drawing their first three games under Andy Thorn, it was a second successive league defeat for the caretaker managerial team of Richard Shaw and Lee Carsley.

The Sky Blues could have gone in front early on through defender William Edjenguele and then McGoldrick, who had an eighth-minute effort ruled out for a push by Stephen Elliott on visiting keeper Chris Day.

But the home side only had to wait three more minutes before on-loan Nottingham Forest man McGoldrick brought the ball down well just outside the corner of the area, jinked to his right and curled home a right-footed effort to which Day could only get his fingertips.

Stevenage then levelled when Luke Freeman's shot was parried by Joe Murphy and Shroot followed up to convert, although the home keeper complained bitterly that Patrick Agyemang was in an offside positon.

Coventry had further cause for complaint on 27 minutes when Elliott netted from a tight angle, but was harshly judged to have been offside.

"I think the players knew that this was going to be an extremely tough game, possibly the toughest of the season so far.

"This (Coventry) is a club that feels like they ought to be in the Championship and when you look at the calibre of the players they have to choose from, you expect a really tough task.

"It was a fabulous strike from them for the opener but I thought the response was very good.

"It was very important to score before half-time, which we did, and the second period opened out in a completely different way and I thought we actually played the game how we wanted to, which was to win the midfield area and counter-attack."