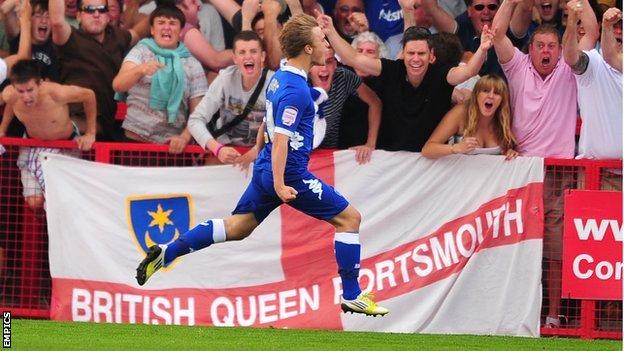 Teenager Ashley Harris was scorer and provider as Portsmouth posted their first League One win of the season against nine-man Crawley.

Josh Simpson and Hope Akpan were both dismissed for two bookable offences either side of half time.

The defeat, in front of a record crowd of 5,058 at the Broadfield Stadium, denied Crawley the chance to move joint top of the table with Notts County but does see Portsmouth climb six places to 16th.

But, after a bright start, the hosts were reduced to 10 men four minutes before the break when Simpson was shown his second yellow after consecutive fouls on McLeod.

The game remained at a stalemate for another 30 minutes before Akpan saw red and, with both Crawley's central midfielders in the dressing room, Pompey soon took advantage.

"The biggest thing I am delighted with is the composure they've shown to play against ten men which was important.

"I was delighted that the [first] goal was made by a 17-year-old and scored by an 18-year-old. It couldn't get any better for us.

[On Gabor Gyepes' injury] "It doesn't look great. He went over on his ankle, he's got a brace on his foot. It seems to be the luck we are having at the moment with central defenders."