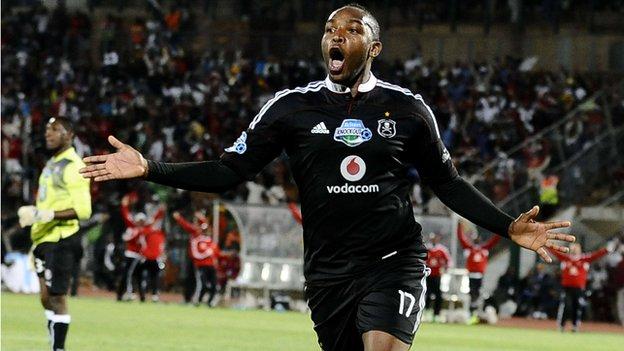 Benni McCarthy has been handed a surprise recall by South Africa for Friday's friendly against Brazil.

The 34-year-old striker has not played for Bafana Bafana for more than two years, having been dropped from the 2010 World Cup squad over his fitness and for breaking a hotel curfew.

After playing for more than a decade in Europe, including winning the Champions League with Jose Mourinho's Porto in 2004, McCarthy returned home last season to score 12 times and win the domestic championship with Orlando Pirates.

In 79 appearances for South Africa he has scored 31 goals.

McCarthy comes in as a replacement for Edward Manqele, who pulled a hamstring in Mamelodi Sundowns' Absa Premiership match against Maritzburg United on Sunday.

Manqele himself had been a replacement for veteran striker Siyabonga Nomvethe, who tore ligaments playing for Moroka Swallows.

Coach Gordon Igesund's preparations have also been hit by the withdrawal of captain Steven Pienaar, who pulled a thigh muscle in Everton's English Premier League clash against West Brom on Saturday.

The midfielder has been in impressive form since returning to Goodison Park from Tottenham but was unable to prevent West Brom winning 2-0.

Igesund will meet the squad before naming a skipper for the Brazil showdown.

The match between the 2010 and 2014 World Cup hosts marks the debut of Igesund as Bafana Bafana coach after leading a record four clubs to the South African Premiership title.

Bafana travel to Rio for the friendly against the five-time world champions before hosting the Black Mambas of Mozambique in Nelspruit on 11 September.