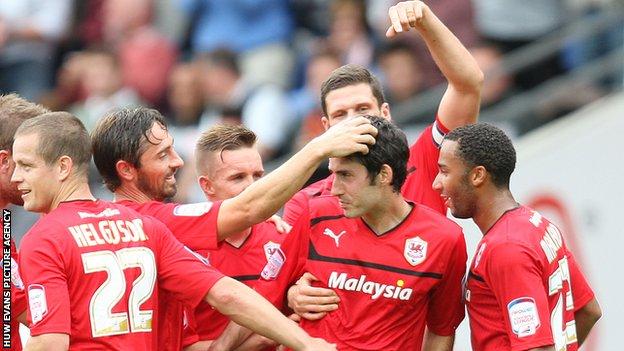 Whittingham's hat-trick gave the Bluebirds a 3-1 Championship win over Wolves, who were relegated from the Premier League last season.

Outstanding debutant Craig Noone was one of six new signings in Cardiff's side and Whittingham says the strength in depth is now better than ever.

"We've got a strong squad now," said the 27-year-old midfielder.

"When you look at the boys that weren't even on the bench - it's pretty crazy. There's competition for places and it brings out the best in everyone."

Cardiff have lost in the Championship play-offs for the past three seasons, twice under Dave Jones before Malky Mackay suffered the same fate in his first season in charge.

Ten new players have been recruited as Mackay has benefited from the promise of a £10m transfer budget by the Malaysian owners.

"He was voted the best player outside the Premier League last season and I will continue pushing and driving him," said Mackay.

"He's a fantastic talent and I think he's still got more to offer. He wants it and he expects it. He's asking me questions as to how to get better.

"We work hard with him everyday and I see a top-class player there. But I also see someone who is now becoming a leader.

"Someone who's beginning to tell people what to do, push people into positions and work defensively hard for the team as well."

Whittingham showed all his class with three goals against Wolves, the first two coming in the space of four minutes immediately after the visitors had taken the lead.

The third, a curling free-kick into the top corner, was the pick of the goals. Cardiff rejected two summer bids from Fulham for Whittingham, who stresses his decision to sign a new contract underlines his total belief that the club can deliver his Premier League ambition.

"I'm going on 28 now so it was going to be a big decision to sign a new contract," he said. "As I've said all along, I've bought into this and I want to get Cardiff into the Premier League.

"It's been my aim the whole time and we're looking now we've got some players we can do it.