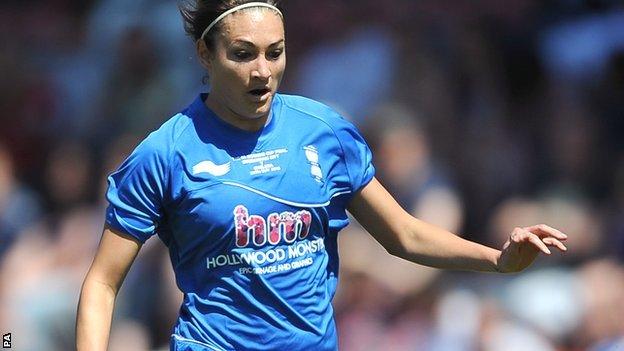 Taylor scored either side of half-time, but the Imps almost forced extra-time after Laura Alleway's late goal.

Blues will meet the winners of Monday's second semi-final between Arsenal and Bristol Academy in next month's final.

In the weekend's only League game, Everton were held to a 1-1 draw by second-bottom Doncaster Belles.

In a lively start to the game Birmingham twice went close to taking the lead.

And three minutes later an Eni Aluko cross looped over the Imps defence and struck the far post.

Taylor should then have put Blues ahead but skied the ball over the bar from a good position.

That miss almost proved costly in the 25th minute, when Lincoln midfielder Lucy Staniforth's 30-yard free-kick was turned on to the bar by keeper Marie Hourihan.

But the visitors broke the deadlock in first-half stoppage time, Taylor shooting in from close range following a Potter corner.

The home side had the better of the second half but they went further behind in 75th minute, Taylor chasing Hourihan's long clearance to hoist a lob over Hobbs.

Birmingham's place in the final looked assured, but Lincoln produced a late fightback and almost forced the tie into extra-time.

An 88th-minute goalmouth scramble saw a Jess Clarke shot hit the post, but the winger latched on to the rebound to cross for midfielder Alleway to reduce the arrears.

But despite further pressure in stoppage time, the Imps could not find an equaliser.

A draw edged Everton up to second place in the table but they are still five points behind leaders Arsenal, who now have a game in hand.

The Toffees had to come from behind after defender Leandra Little put the Belles in front with a close-range shot from a 13th-minute Aine O'Gorman corner.

There was no great threat from the home side in the first half, but they were much better after the break and should have won the game.

Fara Williams hit their 56th-minute equaliser, the midfielder rifling a superb 30-yard shot into the roof of the net.

The Donny defence then came under increasing pressure as the home side went all out for a winner.

But the visitors held out and almost snatched victory in the dying minutes, striker Millie Bright's deflected shot forcing keeper Rachel Brown into a brilliant save.