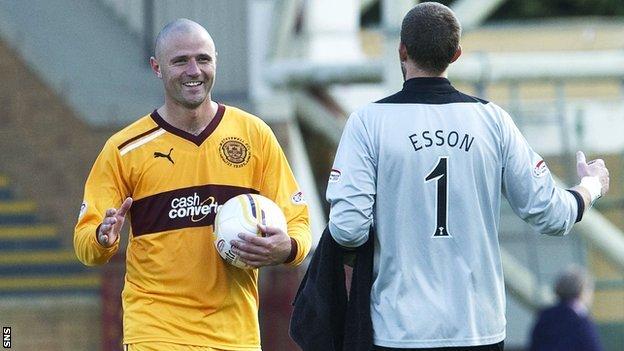 Motherwell boss Stuart McCall revealed Michael Higdon made good on a promise to net a hat-trick against Inverness.

Higdon had been struggling with an Achilles problem before the match at Fir Park but the striker's treble clinched a 4-1 win.

"He said, 'I tell you what I'll do gaffer, I'll score a hat-trick on Sunday then I'll have a couple of weeks off'," McCall told BBC Scotland.

"It was an old-fashioned centre-forward performance, with fantastic finishing."

The victory, which also featured a Tom Hateley goal, lifted Well to the top of the Scottish Premier League going into the international break.

"It was a really good entertaining game and I thought we got the upper hand in the second half, but even at 2-0 against Terry Butcher's sides, you're never comfortable," said McCall.

"They got a goal back through Richie Foran which I thought they deserved.

"Just before half-time he was one-on-one with our goalkeeper, and everyone will remember Darren's penalty save [from Andrew Shinnie late in the game], but his save with his legs at that time was important.

"I was really pleased by how we came out in the second half.

"We didn't want to sit deep and we asked questions of them and got goals that merited the victory.

"We got a good performance and a good victory.

"I've got to be very pleased with that and delighted for the players, and it's nice to go into a break on the back of a win."

McCall was also pleased to remain unbeaten in the league.