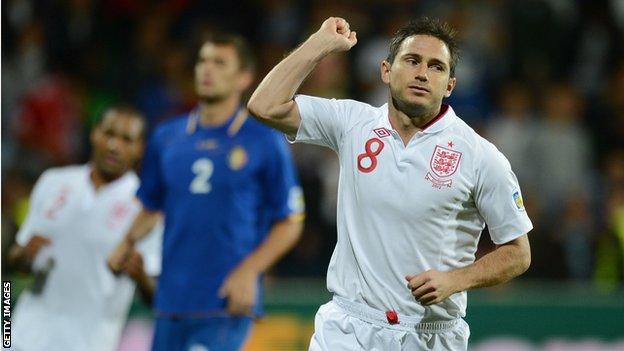 Roy Hodgson's side were three goals up at the interval as Frank Lampard scored an early penalty and headed a second before Jermain Defoe was on target.

England were kept waiting until 16 minutes from time before James Milner added a fourth, while Leighton Baines also scored his first international goal after his free-kick took a massive deflection.

It was a victory that was every bit as emphatic as the 5-0 scoreline suggests.

"England played the first half with a good tempo, they went to kill Moldova off. They tried to pass the ball. On occasions, they maybe overdid it, but Tom Cleverley was exceptional in the first half, Alex Oxlade-Chamberlain was very bright and nobody had a bad game."

Manchester United's Tom Cleverley impressed on his first competitive start and Lampard demonstrated his continued worth at international level in a performance that was little more than a stroll once England swiftly exerted their obvious authority.

The display and result must be placed in the context that was it was against a side that looked every bit their Fifa world ranking of 141 - but England completed the job with efficiency to record their biggest away win in 19 years.

Hodgson may actually feel England could have scored even more but this was the perfect first step on the road to Rio in 2014 and the ideal platform for the second qualifier against Ukraine at Wembley on Tuesday.

Cleverley was a central figure as England took the lead inside three minutes. He saw his shot handled by Moldovan defender Simion Bulgaru and Lampard drilled home the penalty in trademark fashion.

The action was all heading one way and the Moldova keeper was having an adventurous evening. Defoe turned an effort wide at the near post before forcing a fine low save from Stanislav Namasco, who also rescued his own handling error by blocking Alex Oxlade-Chamberlain.

England were graphically illustrating the huge gulf in class between the sides and it was no surprise when Lampard added the second just before the half hour. Steven Gerrard found his Liverpool team-mate Glen Johnson and Lampard arrived in the area with perfect timing to glide a header beyond Namasco.

If Moldova harboured even the slightest hopes of pulling off a comeback that would have bordered on miraculous given their lack of quality, they were snuffed out 13 minutes before the break when Oxlade-Chamberlain picked his way through midfield before releasing Defoe for a finish that should have been dealt with more convincingly by Namasco at his near post.

Moldova did give England's under-employed keeper Joe Hart a worrying moment when Igor Armas sent a free header wide but otherwise it was an easy night.

Gerrard was replaced by Michael Carrick at the start of the second half and a sloppy passage of play followed in which England struggled to recapture the momentum and rhythm of their earlier work.

Theo Walcott and Danny Welbeck were introduced for Oxlade-Chamberlain and Defoe - and both were involved in the build-up which led to Milner's powerful, low finish after 74 minutes.

John Terry then limped off injured with what looked an ankle problem which may make him doubtful to face Ukraine.

It was the final act of a painful evening for Moldova in Chisinau and a highly satisfactory one for England.