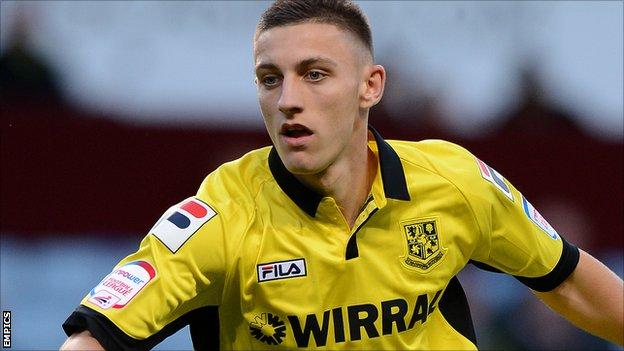 Jake Cassidy says his hat-trick in Tranmere's 4-0 win over Colchester came as a result of extra work in training.

"When the chances come your way, you have to put them away and that's what I did," he told BBC Radio Merseyside.

"We've been working on going across the front post in training and I got two goals that way on Saturday."

The 19-year-old striker, who is currently on loan from Wolves, fired his side to the top of League One as they sealed a third win in four games.

Cassidy had previously failed to score since returning for a second loan spell at Prenton Park.

"He's just been a little bit off it and not been getting across the near post," said Rovers boss Ronnie Moore. "We spoke a lot about it in training.

"There were some quality balls going in there and it was some great finishing from the young lad."

"The chairman will have a panic on now because that's two hat-tricks in four games," added Moore.

"'Robbo' had one, Jake's got one, and we're just waiting for (Jean-Louis) Akpa Akpro now. He was fantastic and was very unlucky when he hit the post."