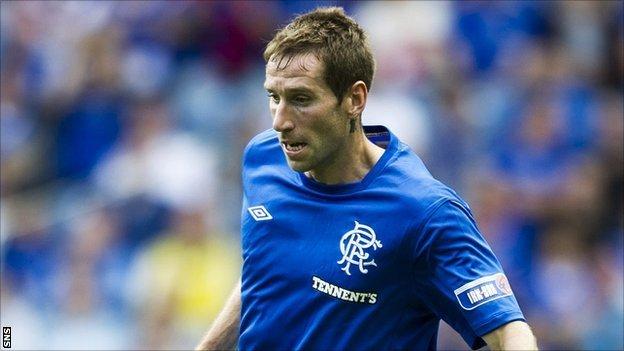 Blackpool have signed former Scotland defender Kirk Broadfoot, who was a free agent after

The 28-year-old had agreed to stay with the Gers following their liquidation and their subsequent demotion to the Scottish Third Division.

Broadfoot will stay at Bloomfield Road until the end of the season.

"It's a new chapter to my career and one I'm looking forward to. Something I've always wanted to do is play down south," he told BBC Radio Lancashire.

"Blackpool has got something special about it. It seems to have this aura about it

"It's a sad day [to leave Rangers] because it was always a dream to play with them.

"I almost signed here a couple of seasons ago and I stayed with Rangers at that time, but speaking to the manager (Ian Holloway) I was blown away by him and the way Blackpool play.

"I've watched them a few times since then and my friend, Charlie Adam, played here. People couldn't speak highly enough of the club.

"Blackpool has got something special about it. It seems to have this aura about it. Everyone seems to enjoy themselves here."

Broadfoot had made five appearances for Ally McCoist's side this season.

The versatile player joined Rangers from St Mirren in 2007 and played an important part in their run to the Uefa Cup final the following year.

He remained a regular starter until a series of injuries, which started in 2009, curtailed his involvement under manager Walter Smith and successor McCoist.

Broadfoot's four senior international caps all came in 2008, and he hopes the move could see him return to Craig Levein's squad.

"I've been a little unlucky with injuries," he added. "If I'd stayed at Rangers in the Third Division, I don't think it would have been likely that I'd have got into the Scotland squad.

"Hopefully I can come down here, play a few games and get back into that Scotland setup."

Blackpool have made an impressive start to the Championship season and remain top of the division, although their 100% start to the campaign was ended with a 1-0 defeat at Leicester on Saturday.