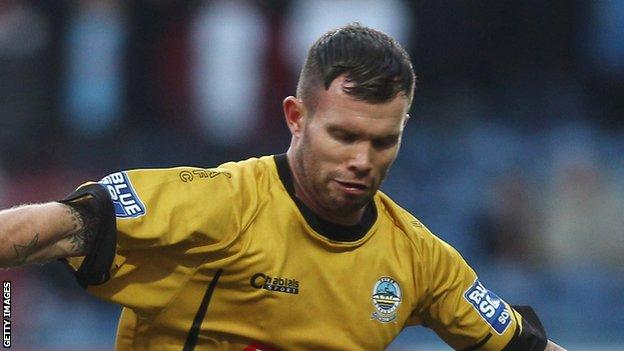 Gillingham striker Adam Birchall says he was relieved to finally make his home debut on Saturday.

The 27-year-old, who missed the whole of last season through injury, came on as a sub in the draw with Chesterfield.

He told BBC Radio Kent: "I worked so hard to get this dream move to Gillingham from non-league. I wasn't willing to give up on it.

"It's been a hard struggle to get to this point. It felt amazing. I can start kicking on with my career again."

Birchall joined the Gills last summer from Dover Athletic but ruptured his cruciate ligament in a pre-season friendly and was forced to sit out the whole campaign.

His first competitive run-out at Priestfield could have been even better had Birchall converted a late chance to win the game.

"It would have been the fairytale start [to score the winner] but I'd rather have a fairytale career here," he added.

"The last couple of weeks my knee has been feeling a bit off. I've been given time to rest it and strengthen it.

"I was buzzing when I was told I was on the bench and I loved being out there."

Gillingham boss Martin Allen has praised Birchall's attitude in training since he stepped up his return in pre-season.

"I love him around the training ground. He always smiles at me and is such a happy character.

"I think he nearly fell over in shock [when I told him he was playing] because he was expecting just to come and watch the game and then train on Monday.

"The gamble nearly came off because the shot he had missed by a whisker.

"That was why he was on - to do that kind of damage.

"It would have been a total fairytale story on his home debut after a year out if he'd actually finished it off."

Despite having now made two appearances from the bench, Birchall knows he may have to wait longer before being handed his first start for the League Two club.

"When you've been out this long, you have to be so patient," Birchall continued.

"The gaffer has been great, helping me through each step of my pre-season.

"Match sharpness is something that comes with games.

"It's [about] hanging in there, showing what I can do in training, hopefully catching the management team's eye and see where it takes me."