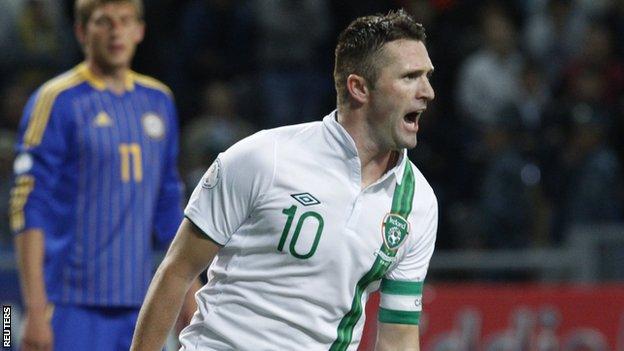 The Republic of Ireland hit two late goals to snatch a dramatic but undeserved win over Kazakhstan in their opening World Cup qualifier in Astana.

James McCarthy went close for the Irish early on but the visitors lost their way badly and Kairat Nurdauletov nodded the home side ahead on 38 minutes.

A Republic defeat seemed inevitable before Robbie Keane's 89th-minute penalty appeared to have earned a draw.

However, sub Kevin Doyle volleyed in the winner a minute later.

Prior to Keane's levelling penalty, there was nothing in the second half to suggest that the Irish were going to end up with anything less than an ignominious defeat.

Before the goals, Giovanni Trapattoni's Irish side rarely threatened in the second half with their long-ball tactics proving totally ineffective.

Kazakhstan went into the game 142nd in the world rankings - 116 places below the Irish.

Trapattoni, 73, went into Friday's contest under some pressure with Shay Given and Damien Duff having unannounced their international retirements after the country's dismal showing at Euro 2012.

The Italian's playing hand for Friday's contest was also reduced by Darron Gibson's decision to withdraw his services from the squad following his non-involvement in Poland and the Ukraine.

The initial signs were promising on the artificial playing surface in Astana as McCarthy, making his competitive Irish debut, tested keeper Andrey Sidelnikov with a curling shot in the third minute.

Aiden McGeady then shot just wide from outside the box three minutes later after one of his typical jinking runs.

But in truth that was as it got for the Republic as they went into their shell for the next 83 minutes of action before the remarkable late turnaround.

With the Kazakhs sensing that the Irish were struggling, Tanat Nusserbayev and Heinrich Schmidtgal produced a series of attacking thrusts only to fail to deliver the final ball.

However, the home side took the lead on 38 minutes after Republic full-back Stephen Ward had needlessly conceded a free-kick in a dangerous position.

German-based Schmidtgal's brilliantly weighted deliverly was glanced to the net past Keiren Westwood by skipper Nurdauletov.

It could have been 2-0 three minutes later with Westwood making a great save to push away Ulan Konysbayev's drive with Nusserbayev judged offside as he hit the woodwork with the pointblank rebound.

Despite the dismal first-half showing, Trapattoni chose not to make any changes at the interval and it was more of the same for the Irish after the break.

The Republic boss finally acted just before the hour as Doyle replaced the ineffective Simon Cox but Kazakhstan were still bossing the game.

Baurzhan Jolchiyev should have extended the home side's lead in the 77th minute after charging clear of the Irish defence but Westwood stood tall to make a brilliant and vital save.

As the clocked ticked down, there was no hint that a late Republic rally might materialise.

But with a minute left, Doyle's cross from the left was sliced towards his own net by Mukhtar Mukhtarov which left Mikhail Rozhkov with little option but to bundle down Keane as the LA Galaxy striker looked set to nod home.

The Republic captain held his nerve to hammer his penalty past Sidelnikov for his 54th international goal as the Irish appeared to have snatched a hugely fortunate point.

But incredibly, there was yet more drama to come as Doyle volleyed home from close range a minute later after Ward's knock down.

The Irish players looked almost embarrassed at the final whistle as the home team wondered how they had managed to end up as losers.

The Republic's next qualifier will see them taking on Germany in Dublin on 12 October although Trapattoni's side face Oman in a friendly at Craven Cottage on Tuesday.