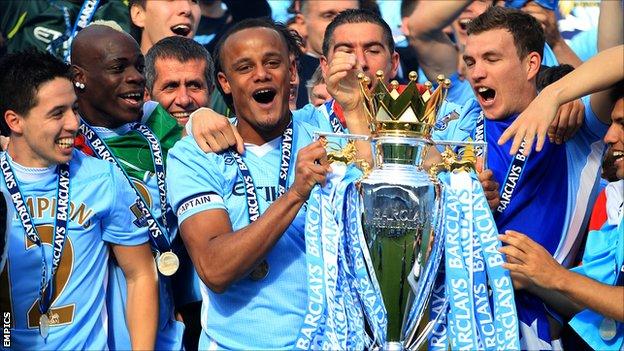 Premier League winners City will face the champions of Spain, Germany and the Netherlands - Real Madrid, Borussia Dortmund and Ajax - in Group D.

"It's a great challenge and I do think we're the kind of team that gets better when the challenges are greater," Kompany told BBC Radio Manchester.

"It's perfect for us. There won't be any moment where we're surprised."

Roberto Mancini's side begin the group stages with an away fixture at the Bernabeu against nine-time winners Madrid on 18 September.

Last season City made their first appearance in European football's premier club competition since 1968-69. But they were unable to progress from a group containing Bayern Munich, Napoli and Villarreal.

"That's why you're in the Champions League," added the 26-year-old Belgium international. "I thought it couldn't be much more difficult than last season, but there you go.

"The motivation will always be sky high and the atmosphere will be great in each of the six games that we have in the group.

"I know it's all about how far you get in the competition, but I'd like to think it's even better when you get to play against the best teams."

City have made a solid start to the defence of their Premier League title, taking seven points from their first three matches.

Kompany continued: "If you look at the goals that we've conceded, we've been very unlucky.

"The two goals against Liverpool were from set-pieces and Southampton scored from the only two chances they had in the game.

"The team have done a good job so far. We've taken seven points out of nine and we've won the Community Shield so it's been a very good start."