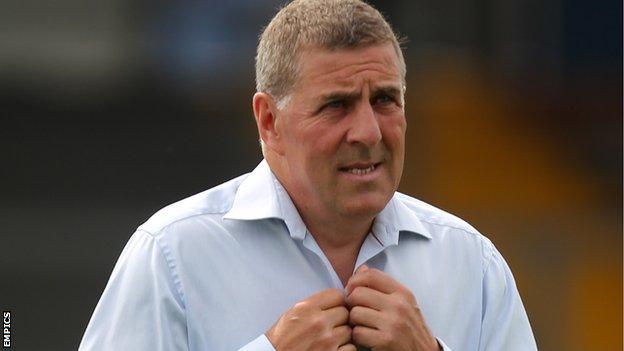 Manager Mark McGhee says Bristol Rovers must prove they can recover from their 3-0 home defeat by Morecambe.

The Scotsman kept his squad behind on Saturday to analyse their second-half performance, in which they shipped three goals in 10 minutes.

And McGhee told BBC Radio Bristol they must show a response in their Johnstone's Paint Trophy game with Yeovil on Tuesday.

"We've talked the talk and now we've got to walk the walk," he said.

"At half-time [on Saturday] I was convinced we were going to win the football match.

"The reason why we had the post-mortem for two hours after the final whistle was to find out what happened after the first goal.

"It's not something I've ever done before but I wasn't prepared to go home on Saturday night without some answers.

"But there was a mental capitulation and that was the thing that concerned me more than anything."

Rovers are still searching for their first win of the League Two season, and are yet to score a goal at the Memorial Stadium.

And following Saturday's defeat, McGhee suggested some of his players were intimidated by the expectation of the vocal Gas faithful.

After dissecting the performance with the players, he concluded: "We've got to give the supporters something to be positive about.

"I know if we start winning games again it will become a great place to play.

"We've had two games and not had a goal but it's the start of the season and we're still slotting it together.

"I've got a squad I want and believe in but we've got to stand up and be counted."