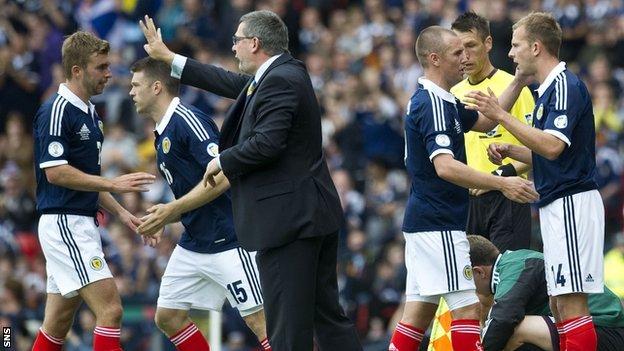 Coach Craig Levein admits he waited too long to make substitutions in Scotland's 0-0 draw with Serbia.

Levein introduced James Forrest with just over 20 minutes remaining and threw on forwards Jamie Mackie and Jordan Rhodes in the final 10 minutes.

"We got out of this game with a draw. It's not what we wanted, but it's certainly not a disaster."

Scotland's delivery let them down in a first half of few chances, but they created more opportunities in the second half.

Forrest had one of the Scots' few efforts on target in stoppage time, Vladimir Stojkovic making a timely save for the visitors, who will be happier with a point than their hosts.

"I thought James might give us a little spark and it took him five or 10 minutes to get into the game, I didn't get an instant reaction, although he finished the game excellently," Levein said.

"There's always this thought, if we open it up and go for it, is there a chance of losing the game. Maybe if I had gone five minutes earlier, but you never know."

Levein thought the two late substitutions also made an impact.

"After the lads came on, I thought they both did well and we still had a couple of opportunities after that and I thought particularly Mackie made a huge impact in the game," he said.

"I was toying with the idea of bringing Shaun Maloney on at one point but then decided to go with putting the two strikers on.

"There's loads and loads of options. Sometimes they work for you, sometimes they don't. I thought they made a difference, but we didn't get the victory.

"Disappointed we didn't win, that's my overriding feeling. We created enough chances to win the game and the disappointing thing was we didn't."

The result means that, after one round of fixtures, Scotland and Serbia trail Belgium and Croatia by two points in Group A.

"We got into the areas we needed to get into, but we didn't quite manage to force the ball home. A combination of good goalkeeping and maybe being a bit slack in our finishing.

"I look at how we're progressing and we played Czech Republic not so long ago and had nowhere near the amount of chances and I'd say this team were just as good as Czech Republic.

"We had a lot more chances, unfortunately we just didn't take them.

"I know we can play better. We did a lot of good things, but if two or three of our normally more creative players had just found that final pass, we would've been walking away with a win."