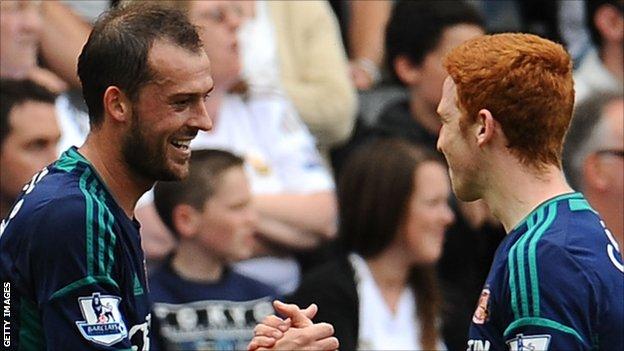 Boss Martin O'Neill has backed Steven Fletcher to build on the goalscoring start to his Sunderland career after Saturday's 2-2 draw at Swansea City.

The 25-year-old struck twice on his league debut to earn a point for the Black Cats at the Liberty Stadium.

"Steven will score goals and he will link up play and bring people into the game," O'Neill told BBC Newcastle.

Fletcher's sharpness was dented by Wolves' reluctance to play the striker during negotiations that preceded his £14m move to the Stadium of Light last month.

Steven Fletcher has eight Scotland caps, but has not figured for the national team since a disagreement with boss Craig Levein led to his informing the national team manager he was not available for selection. In turn Levein said the player would not be selected while he was in charge.

His debut came with a 66-minute run-out in the 2-0 Capital One Cup win against Morecambe, the first outing since figuring in Wolves' friendly with Bray in July.

However, the international break will allow Fletcher to train and recover sharpness in time for the visit of Liverpool a week on Saturday.

"For myself I need to get some fitness, so it's good for me to get some of that out of the way," Fletcher said.

"I can go into training, get some fitness work under my belt and I'm looking forward to that."

O'Neill added: "The next fortnight will help him enormously and the same goes for Stephane [Sessegnon].

"They've had no kind of pre-season but we'll get fitter and we'll get stronger."

Sessegnon missed the Wearsiders pre-season campaign with a ankle problem but has featured in three games so far.