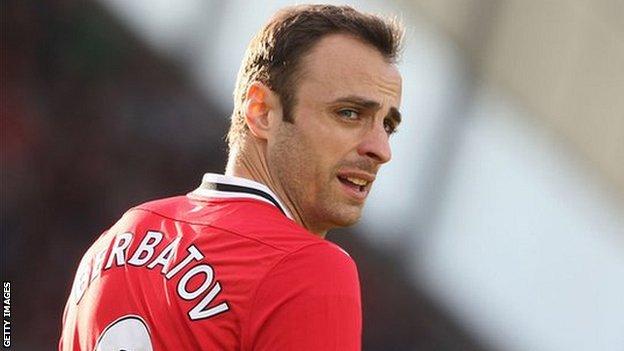 Dimitar Berbatov has criticised Manchester United boss Sir Alex Ferguson for the way he was treated during his final season at the club.

The striker, 31, made only 12 Premier League appearances for United in 2011-12 and moved to Fulham last week.

"I said goodbye to the people who deserve it, I couldn't say goodbye to Ferguson," said the Bulgarian.

"I know he's the boss but he has lost, to some extent, my respect because of the way he treated me."

But he was left out of United's squad for the 2011 Champions League final against Barcelona and then featured only fleetingly last season.

"I don't think I deserved such treatment at United, not playing in the last year," he told reporters in Sofia.

I scored many goals, I won the league two times, and I was the league top scorer, so it's not bad

"I went probably 15 times to ask the coach if he needed me. Every time I was told that I'm an important player and should not leave but then again I was not in the team. Maybe I should have gone when he left me out of the squad for the Champions League final."

Berbatov believes he fell out of favour because Ferguson wanted to play with a different style.

"He tried to explain to me that the team will be using a more direct style, with more speed," said the striker. "But I've never been among the fastest players. I like to hold the ball, this is my style.

"I found it hard to accept his decision, I still have my dignity. I scored many goals, I won the league two times and I was the league top scorer, so it's not bad.

"I'll have no problems playing against United as this already happened in my career. But there's no point to look back again."

Berbatov's move to Fulham, for a reported £5m, was not without controversy, after he angered Fiorentina by turning down the chance to join them and then rejected a move to Juventus.

He explained: "I've never personally told them: 'Yes, I'll play for you'. It's not my problem that someone is disappointed. After all, I choose where to play and be happy."

Berbatov's agent Emil Danchev also revealed that Tottenham had made a last-ditch attempt to re-sign their former player.