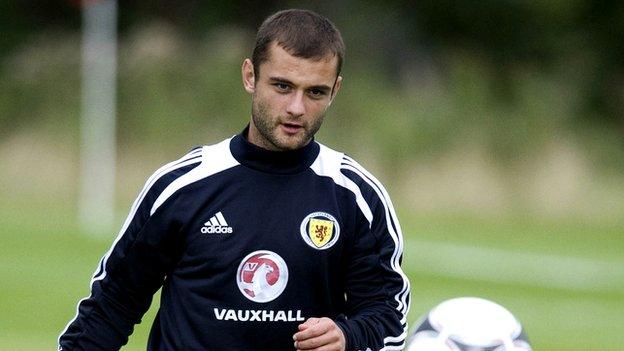 Shaun Maloney is grateful to Wigan manager Roberto Martinez for rekindling his love of football and hopes to carry it into Scotland's World Cup campaign.

The midfielder played a major part in Wigan's late revival last season and in their fine start to the current term.

"I think the way we play football and the way my club manager asks me to play, or asks the team to play, is enjoyable to play in," he said.

"Playing regularly does make things a lot happier within your career."

Maloney had an inconsistent three-year second spell with Celtic after a disappointing first season in England's top flight with Aston Villa.

But, after a difficult start to his first season with Wigan, he sparked into life just in time to help Martinez's side avoid relegation and he has carried that on into the current campaign.

"I'm enjoying it at the minute and, fingers crossed, that will continue," said the 29-year-old.

Despite early praise for his own and his side's early-season form, Maloney is wary of predicting anything other than another battle to avoid the drop.

"I think it's difficult to second guess where you're going to finish," he said, pointing out that Martinez believes their destiny lies on how they approach each game.

"If we don't work as hard as we did in the games against United, Arsenal, Chelsea and teams like that, then we don't win.

"If we continue to do that, we'll improve on last season.

"But, if we don't, we'll find ourselves in the bottom half of the table again."

Maloney is hoping his form will win him a starting place in Craig Levein's Scotland side for their opening Group A World Cup qualifier against Serbia on Saturday.

The midfielder thinks Levein is similar to his club manager in putting great emphasis on the work ethic.

"I think the bare minimum the manager requires from his midfield is the work rate," he said.

"Particularly off the ball when we lose possession, there's an emphasis on getting the ball back.

"I think if you don't do that then you don't play.

"Everyone in the squad realises what the manager expects from them and, fingers crossed, I can do enough to get in the starting XI.

"I think every manager demands that from midfielders and strikers nowadays."