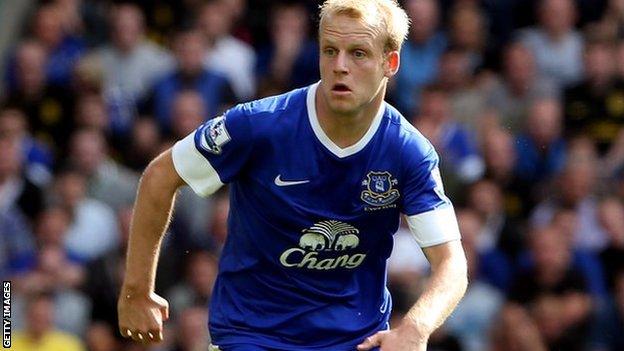 Steven Naismith says missing most of last season through injury has given him a new thirst for action - with Everton and Scotland.

The 25-year-old forward is now back to full fitness, after moving to Everton from Rangers during the summer.

"The whole way through most of pre-season, I've enjoyed it more than most footballers enjoy pre-season just for the fact I had been out," he said.

"Now that I'm back involved in games, the games can't come quick enough."

The competition for places is really, really strong and that can only be good

Naismith has played his part in Everton's good early-season form, which has seen the Toffees take six points from their opening three matches.

"I think that was something the manager made a conscious point of stating to the players, that he wanted us to start well," he said.

"We showed, especially in the Manchester United game, we were willing to fight and got our just rewards with a good 1-0 win and we pushed on from there in the cup game [beating Leyton Orient 5-0] and against Aston Villa [won 3-1], although obviously last weekend wasn't a great result to finish it off."

That momentum was halted with a disappointing 2-0 defeat away to West Brom on Saturday, but Naismith is hoping it is only a temporary blip.

"The squad believe we can go into every game and compete and win," he said, while remaining coy about making any end-of-season predictions.

"You want to finish as high as you can, that goes without saying, but it's too early to say where you're going to finish.

"The teams you come up against every week, it shows there is real quality in every team.

"Every game's a tough game and you've got to be at your best to get results."

Naismith, who has joined the Scotland squad ahead of Saturday's World Cup Group A qualifying opener against Serbia, said it was similarly tough to win a starting place in Craig Levein's starting line-up.

"That's one thing that's noticeable - the competition for places is really, really strong and that can only be good," he added.

"You need to be at your best for your club to be in with a chance of being selected."