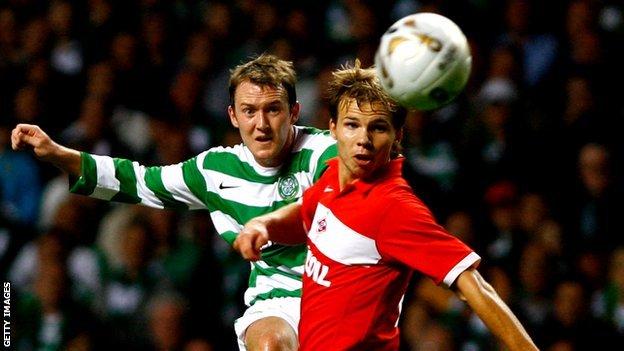 Former Celtic player Aiden McGeady has revealed his excitement at returning to his old club in the Champions League.

McGeady's present side, Spartak Moscow, have been drawn in the same group as Celtic, Barcelona and Benfica.

But McGeady admits it will be a strange experience going into the away dressing room for the 5 December match.

"I've been back a few times as a fan, so to go back as a player will be a different experience, but it's one that I'm looking forward to," he said.

"I'm still in contact with people at the club and I've still got friends at the club but it will be strange going into the away dressing room.

"That's where I used to get changed up until I was about 18, when I was in the reserves," McGeady told the club's official website.

The Irish international featured for Celtic when the sides last met, in a Champions League qualifier in 2007 and signed for the Russians in 2010.

"I never thought at the time that I would end up signing for Spartak but it's funny how football works out," he said.

"But that game against Spartak was one of the great European nights at Celtic Park."

The Slovak international goalkeeper moved on a season-long loan from Nantes on transfer-deadline day.

"All of the people in Slovakia are proud of Moravcik and Varga and now I am following in their footsteps," he told the club's official website.

"There is huge interest back home in my country about the transfer because it´s Celtic."