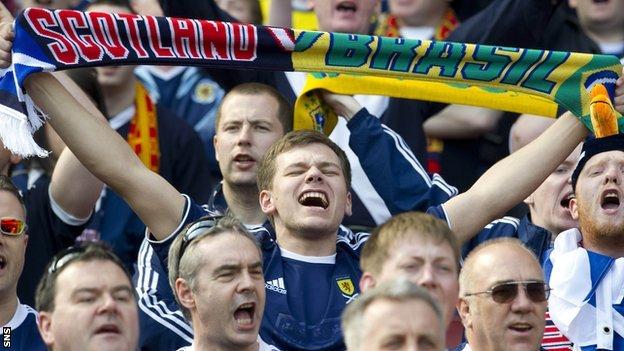 Scotland fans will expect an attacking approach in the double header against Serbia and Macedonia, as we get our World Cup qualifying campaign under way.

Many supporters feel that we have the nucleus of a decent side and the recent 3-1 win against Australia, when the team looked lively in attack, suggests that a positive, if not gung-ho approach, is the one most likely to pay dividends.

Whichever tactical formation Scotland sides play with, we struggle in attempting to play a European style of game, where the rhythm and pace of the play can be constantly interchanged between slow and quick.

Many European sides still appear to have a better level of technical ability, which means they are more at ease on the ball, can master it more adeptly in tight situations without squandering possession and can switch the pace of their play at will.

We have never been comfortable with that style of play and a high tempo and energetic style of game seems to suit us better.

That aggressive style also chimes with the expectations of the Hampden crowd which likes to see Scotland sides drive at the opposition.

A 16-year run without reaching major finals will hopefully come to an end with qualification for Brazil in 2014. Failure to qualify would undoubtedly lead to calls for a change of manager and root-and-branch change in the Scottish game.

So what are our chances of making the carnival in Rio in 2014?

This Scotland squad has a host of players playing Premiership football.

While it may not be the best league on the planet in terms of technical ability, the English top flight can lay claim to being the most competitive.

So, we have a nucleus of players capable of holding their own each week in the world's top division.

We will have to be at our best defensively and at our hardest working in midfield.

But, above all, we need to score goals.

And while he is not a Premiership striker, in Jordan Rhodes Scotland have found a player who does what it says on the tin: he scores goals. If he can do it at international level on a regular basis that will be an enormous boost for our campaign hopes.

However, with our recent dismal record in qualifying for major tournaments, nothing can be taken for granted.

Belgium are full of invention and creativity, and Croatia and Wales will both provide a very stern test.

That leaves many observers feeling that nothing short of two home wins against Serbia and Macedonia will be needed, if this World Cup campaign is to stand any chance of taking us on a Brazilian odyssey.

Six points from the opening two games at Hampden and the Tartan Army's chances of a stroll along the Copacabana will look infinitely brighter.

Anything less and I fear the sand will have been well and truly kicked in our faces.