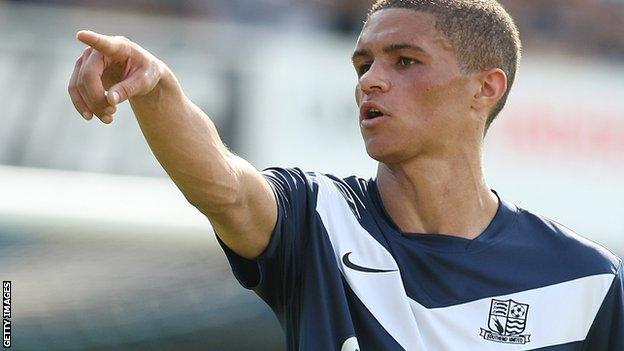 Peterborough United new boy Kane Ferdinand believes versatility may be one of his biggest assets as he looks to make an impact at London Road.

The 19-year-old joined Posh from Southend on transfer deadline day for an initial fee of £200,000.

"I've played in a few positions. I've mainly been up front this season, just off the striker or as an attacking midfielder," he said.

"Most of the time I'm one of the central two in the middle of the park."

Ferdinand, who made 71 appearances for Southend despite his young age, first came to Peterborough's attention last year.

The cousin of Premier League defenders Rio and Anton, he has arrived at London Road at a difficult time with the team bottom of the table after failing to take a single point from four games so far.

However, he is positive about their prospects after watching last Saturday's 1-0 defeat at Birmingham City.

"I thought we deserved to win the game and were unlucky not to score," the Republic of Ireland Under-19 international told BBC Radio Cambridgeshire.

"Four straight league defeats doesn't look good. But as long as we keep our heads high and go into the next game believing we can win, I think we'll do alright this season."

Ferdinand is not assuming a first-team place will automatically be his despite a transfer deal which could eventually earn Southend over £500,000.

However, he added: "Any players' aspiration is to play as high as he possibly can, so playing in the Championship will mean a lot for me.

"But it's still the early stages of my career and I'll be patient if I have to be."