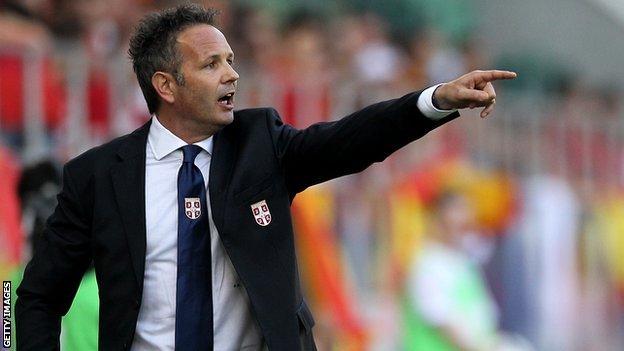 It is now more than 13 months since the draw for the qualifying stage of World Cup 2014.

The initial Scottish reaction to it was fairly positive.

There were none of the "so-called" giants of international football.

I think we have a better team than Scotland

No Spain to be mesmerised by. No defending World Cup winners or, indeed, beaten finalists.

But in the 400 plus days since Brazil legend Ronaldo and current samba star Ganso pulled the names out of the hat, optimism has been replaced by trepidation.

Croatia, Serbia, Belgium, Wales and Macedonia are the hurdles and the longer you look at those names, the tougher Group A appears.

But, one game at a time is the adage, and what the management team will be telling the players when it all starts this weekend.

So, that means the focus falls only on Sinisa Mihaijlovic's Serbia.

That is the same Mihaijlovic who bullied opponents and scored spectacular free-kicks during a glittering playing career, most notably at Red Star Belgrade in his homeland and Sampdoria, Lazio and Inter Milan in Italy.

The 43-year-old came through the ranks in the former Yugoslavia alongside Croatian national icons Zvonimir Boban and Robert Prosinecki and courted controversy throughout his time on the pitch.

The Scots' opening tussle promises to be a tricky hurdle to overcome, not least because the Serbians have qualified for the last two World Cup finals while Scotland have watched the last three on television.

Mihaijlovic has been making positive noises ahead of his first competitive outing as national coach, having replaced Vladimir Petrovic who failed to guide the team to Euro 2012.

He told the Serbian press at the weekend: "I think we have a better team than Scotland."

Mihaijlovic expects his players to win the game at Hampden.

His feeling was echoed on Tuesday by Borussia Dortmund defender - and certain starter on Saturday - Nevan Subutic.

"It is clear that a draw in Glasgow would be a good result as it's important not to lose your opening game, " he said.

"But, technical quality is on our side. It is necessary not to slip-up against the lower ranked teams."

Confident noises, but are they justified?

Serbia - who featured in Northern Ireland's group for Euro 2012 qualification - finished a poor campaign third, way behind leaders Italy and edged out of the play-off place by Estonia.

Their campaign featured the infamous match in Genoa when Scottish referee Craig Thomson abandoned the game after just six minutes because of crowd violence.

The Italians were awarded the tie 3-0 by Uefa.

They have also since had the retirals of Manchester United skipper Nemanja Vidic and Inter Milan stalwart Dejan Stankovic, with Mihaijlovic unable to coax either back into the fray.

The Scots have defensive problems, but Serbia have striking issues in that none of the forwards in the squad coming to Glasgow have an international goal to their name yet.

That is the plus side.

Sadly for Craig Levein's men, the Serbian squad still oozes class, with just about every member of it at a club which has recently competed in the Champions League.

Indeed, in defender and skipper Branislav Ivanovic, they have a man who has won it after Chelsea's Munich glory night in May.

As their coach readily admits, it is a squad going through a transitional period.

In 20-year-old centre-half Nikola Maksimovic they have a ready-made replacement for Vidic.

Manchester City's Aleksandar Kolarov is a mainstay at left-back, with Zenit St Petersburg's combative Aleksander Lukovic brought back from international retirement for the campaign.

In fact, such is their strength at the back, that City's ÂŁ12m signing, defender Matija Nastasic looks likely to miss out.

Partizan Belgrade winger Nemanja Tomic is an exciting talent and Red Star Belgrade's Darko Lazovic is regarded by the aforementioned Croat, Prosinecki, as one of Serbia's biggest talents. Not a bad reference to have on your footballing CV.

Goalscoring is their Achilles heel, with Mihaijlovic likely to have to choose between Partizan's player of the year last season, Lazar Markovic - who is just 18 - and Darko Lekic of Turkish side Genclerbirligi - as his main striker. Eight caps and no goals between them.

They have also only found the net once in their last four internationals.

Just a few months into Mihaijlovic's tenure he is under pressure to deliver, as are his players.

The pressure on Scotland is in being able to puncture a star-studded defence against a side who have only lost four competitive matches away from home - not including their Italian debacle - since independence in 2006.