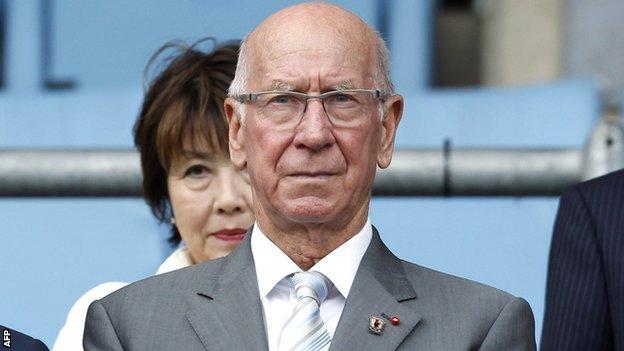 England's record goalscorer Sir Bobby Charlton has written off the current national side's chances of success at the 2014 World Cup.

England begin their qualifying campaign for the tournament in Brazil with a match in Moldova on Friday.

But 1966 World Cup winner Charlton, 74, believes Roy Hodgson's side are "a way off" competing for trophies again.

"They haven't got a lot of top-quality players so you must feel it is going to be difficult to win things," he said.

"You cannot see it happening in Brazil at the next World Cup, for instance.

"Perhaps, if the right group of players come together and stay together for a while and gel into a team, with the right manager, then perhaps it might happen, but I have to be honest and say it's a way off.

"Since the European Union and the influx of so many foreign players, there is a definite shortage of English players from which the England manager can select. It has become far more difficult.

"I feel sorry for the England manager, whoever he is, as he simply doesn't have enough players to choose from."

Charlton's stance differs from his assertion ahead of England's last-eight clash with Italy at Euro 2012, when he claimed Hodgson's side could win the tournament. Italy ended up winning that game 4-2 on penalties following a 0-0 draw in Kiev.

Many believe England's hopes of success lie with Manchester United striker Wayne Rooney, who has struggled to shoulder such expectation since excelling at the 2004 European Championships in Portugal, his first major international tournament.

Rooney helped England reach the quarter-finals, where they knocked out by the hosts on penalties.

Charlton agrees that Rooney is important to England's chances of success and backed the Manchester United player to break his international scoring record of 49 goals if he is utilised properly.

Rooney, 26, has 29 international goals to his name but will not add to that tally against either Moldova or Ukraine the following week as he is sidelined for a month after suffering a gash on his right leg during Manchester United's 3-2 win over Fulham.

"It is up to the England manager to find a way of bringing the best out of him at international level and how best to handle him," added Charlton. "He is handled very well at Manchester United and I am sure it will evolve with England.

"If that is the case, I feel sure Wayne is the player most capable of breaking my record of 49 goals, which has stood the test of time.

"If anyone is going to get the record, then it's going to be Wayne Rooney. He's good enough and he is still young enough.

"No matter how much I might like being the top goalscorer, I will be pleased when someone breaks it, particularly if it's Wayne. I would congratulate them. It is certainly a record to treasure."