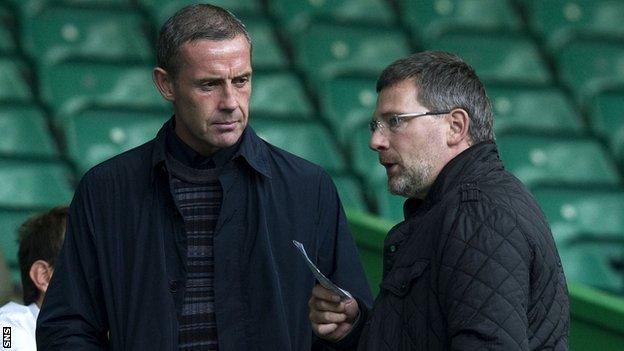 Former Scotland defender David Weir believes wins against both Serbia and Macedonia may be vital to his country's chances of reaching the 2014 World Cup.

Craig Levein's side begin their qualifying campaign on Saturday against Serbia at Hampden, with Macedonia the visitors the following Tuesday.

And Weir feels the squad has the talent to start Group A well.

"Serbia and Macedonia are the teams that you probably would be looking to beat," Weir told BBC Scotland.

"We've done well in the past with winning our home games. If we're going to finish top of the group, we've got to get six [points] but four gives you a chance.

"Anything less than four then you're fighting for second place.

"The squad's settled now. The manager will be happy with the group he's got. He's built the group, he's moulded the group and I think he'll consider them his squad now.

"He's seen them in a campaign and he's got the players there that he wants to pick.

"It's a 'no excuses' situation whereby we'll live or die by the results.

"If they play well and put into practice the tactics that the manager will have thought about and planned for, then they've got a great opportunity to win [against Serbia] because the talent's there."

Weir now coaches at Everton, who signed Scotland forward Steven Naismith this summer, and the 25-year-old is likely to play in Saturday's opener.

"He's fitted in straight away," Weir said of Naismith's arrival at Goodison Park.

"He's come in and hit the ground running.

"He got a hat-trick in a pre-season game and he's been in the team ever since. He's contributed well. Everybody's very happy with him.

"I would start him [against Serbia] but obviously the manager picks the team. Some of his international performances recently have been top class. He's definitely been one of the outstanding performers."

Further on in the qualifying campaign, Scotland will play Belgium, whose squad features Everton pair Merouane Fellaini and Kevin Mirallas.

And Weir admits the Scots face a tall order to contain Fellaini when the two countries meet in October.

"He can control the ball on his chest like some people can't control it with their feet. He's got talents that are a little bit different.

"You've almost got to double up on him."