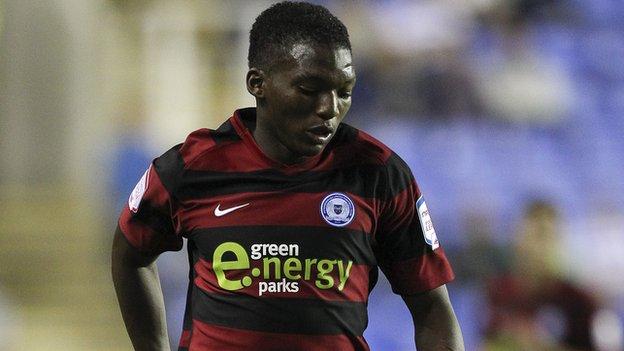 When Kgosi Ntlhe received confirmation of his first senior call-up for South Africa last week, it completed a remarkable 12 months for the Peterborough United teenager.

This time last year, Ntlhe - who was born in Pretoria but moved to England with his mother at the age of 11 - was cutting his teeth on loan at St Albans City in the Evostick Southern League.

Now, having established himself as manager Darren Ferguson's first-choice left-back after starring for Peterborough's youth team, the 18-year-old could become the second youngest player in Bafana Bafana history if he makes his debut in a friendly against five-time World Cup winners Brazil in Sao Paolo on Friday.

"I couldn't believe it when the manager told me and it still hasn't really sunk in," Ntlhe said before he met up with the rest of the South African squad on Monday.

"I am always proud to represent my country so to be called up to the senior squad is a dream. It has been an unbelievable start to the season for me and I am enjoying every minute. I can't wait."

Ntlhe was one of four uncapped players - including Oldham Athletic captain Dean Furman - to be named in Gordon Igesund's first Bafana squad since the coach succeeded Pitso Mosimane in the hotseat.

And after Ntlhe impressed for the Under-20 side in June's eight-nation international tournament in Cape Town, Igesund admitted the youngster was an exciting prospect ahead of the 2013 African Nations Cup on home soil.

Igesund said: "I spoke to Darren Ferguson and he said to me 'this player will never let you down, coach'.

"He says the English Championship is one of the most physical leagues in world football, he says it's 100 miles an hour, which we know. He says this player is just about his best player at the moment, at the back, playing left-back. He goes forward, he's very strong. This guy needs to be looked at."

First spotted in Milton Keynes at the age of 13 by former professional Edwin Stein - older brother of former England international Brian and Chelsea striker Mark - Ntlhe joined Peterborough's youth set-up and became the club's youngest professional when he signed a deal on his 17th birthday.

Having lived in the UK for nearly eight years, he is eligible to represent any of the home nations but Stein believes there was never any doubt he would end up playing for South Africa.

"When I mentioned England, he said there was no way he could consider playing for them because his family is not from there," said Stein.

"Kgosi's got a real sense of where he is from thanks to his Mum so it's great to see his talent has already been noticed over there."