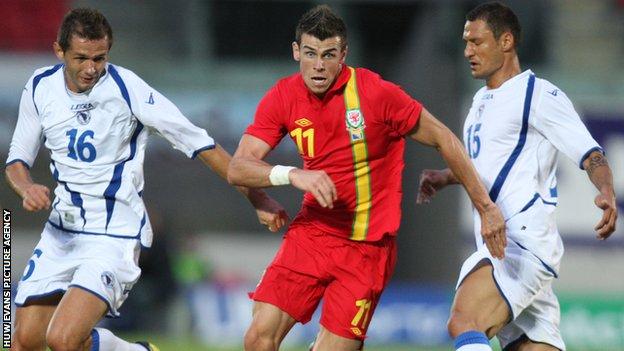 Wales must not rely on Gareth Bale as their only threat against Belgium, according to striker Steve Morison.

Belgium have promised to give special attention to Tottenham winger Bale in Friday's World Cup qualifier.

But Morison, set to play as the lone striker, says Wales cannot expect Bale to beat the Belgians on his own.

"Every time I see him in training and on the pitch he is fantastic, but we cannot rely on him too much," said Morison.

"They will be focussing on him and it's time for some other players to step up. We need to use everyone in the team to get a result.

"Gareth is a fantastic player and he is our biggest match-winner in the team, but teams who play against us are focusing on him and they may be saying: 'If we stop him, we stop Wales'.

"Hopefully, other players on the pitch will take advantage of that."

Wales are still looking for their first goal under manager Chris Coleman and suffered a one-sided 2-0 defeat to Bosnia-Hercegovina in Llanelli in their final warm-up game.

Norwich City striker Morison admits the manner of Wales' last performance, let alone defeat, is the perfect motivation for the visit of the Belgians to Cardiff City Stadium and the beginning of a qualification campaign.

"We had an off night, we knew it, we told each other and the manager [Chris Coleman] told us as well," said Morison, who has scored once in 16 appearances for Wales.

"We don't need to look anywhere but ourselves for that one and we weren't good enough.

"We just have to be very, very good on Friday night and that is what we have to concentrate on."

Morison claims Belgium are favourites to qualify from Group A but believes Wales have to rise to the challenge against one of the most talented sides in Europe.

"The standard of players they have got are fantastic, they are arguably the best players at their individual clubs," said Morison.

"They have fantastic talent and it is going to be a very big test for us. We have to impose ourselves, have a game plan and do what the manager asks of us.

"We have to make sure we all perform and are on the top of our game."