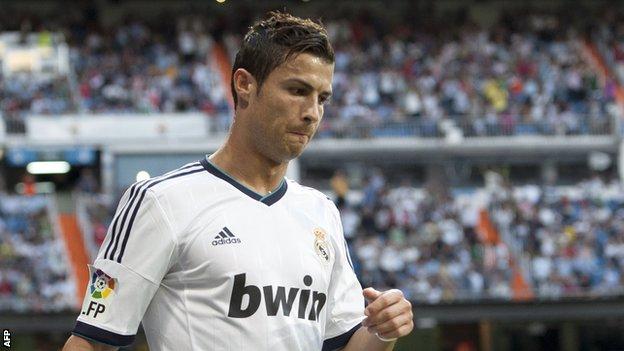 Cristiano Ronaldo has rejected accusations he said he is "sad" at Real Madrid to get more money from the club.

Ronaldo, 27, refused to celebrate either of his goals in Sunday's 3-0 win against Granada and revealed his disquiet to reporters after the match.

Several theories have been put forward to explain his mood, but Ronaldo denied his motives are financial.

"I am accused of wanting more money, but one day it will be shown that this is not the case," the forward said.

It has also been suggested that the Portugal international was upset by a perceived lack of support from his club in his bid to be named World Player of the Year for a second time and because Barcelona midfielder Andres Iniesta was selected as Uefa's Best Player in Europe last week.

Ronaldo has made a huge impact since joining Madrid from Manchester United for a world record £80m fee in 2009. His 46 La Liga goals last season played a key role in helping Real becoming Spanish champions.

Ronaldo insisted that his "motivation, dedication, commitment and desire to win all competitions will not be affected" by his feelings.

He added that he had "too much respect for myself and for Real Madrid to ever give less" than he is capable of.

He said: "If Cristiano is sad and needs the support of his team-mates, then of course he is going to get it. And if it is the support of the fans, I am sure they will give it.

"In Real Madrid, we are a family. When one member is not as happy as he should be we help him. When things are not right we all help."