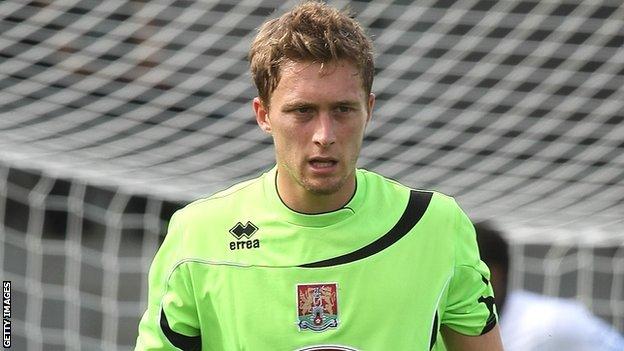 Northampton's Jake Robinson says he is a different player to last season.

The 25-year-old forward scored his first goal for the Cobblers in 36 starts in their 1-0 Johnstone's Paint Trophy first round win over MK Dons.

Robinson told BBC Northampton: "It's been a while coming. There was a lot of frustration and anger coming out with that shot.

"I'd love to get another chance [here] because I feel like I've come back a different player to last year."

The former Brighton, Shrewsbury and Torquay player was making his first appearance of the season.

"I thought pre-season went well for me," said Robinson.

"But it worked out that I wasn't in the gaffer's plans. I kept working hard and did my best to help the team and the squad. I'm not a player that's going to start sulking.

"I want to say thank you to everyone because it has been a hard 14 or 15 months for me. The fans have been fantastic."

Robinson admits it may be some time before he features for the Cobblers again, but hopes for more chances to show manager Aidy Boothroyd what he can do.

"I'm prepared for all eventualities," he said. "I'm working hard here and I'm waiting for a chance."