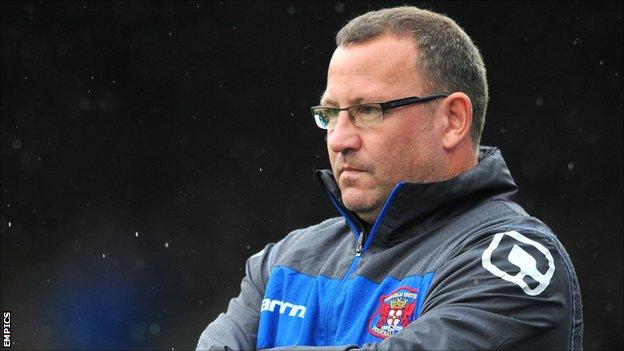 The United boss was angered by what he perceived to be unsporting methods during Tuesday's 1-1 draw.

Abbott told BBC Radio Cumbria: "We need referees to identify what is going on out on the pitch and deal with it.

"We're talking about players going down when they're not injured, timewasting, ruining the game of football."

He added: "It's all about winning, but we need to see teams come out and play the right way."

It is not the first time that a team managed by Graham Westley has been criticised for such activity.

Westley's Stevenage side received a letter from the Football League last season asking them for their response to suggestions that players were systematically feigning injury during games.

Meanwhile Abbott explained his decision to field an experienced side against the Lillywhites, despite the development of academy prospects such as Mark Beck.

"It's not a kids night tonight. Preston are a really tough side, physical and they've got all the tricks in the books.

"We know what we think of the kids, the proof is in the signing of the contracts, but you've got to trust the judgement.

"We want clubs to sniff around, because that means they're doing well, it's what we need, we don't want them to pass by."