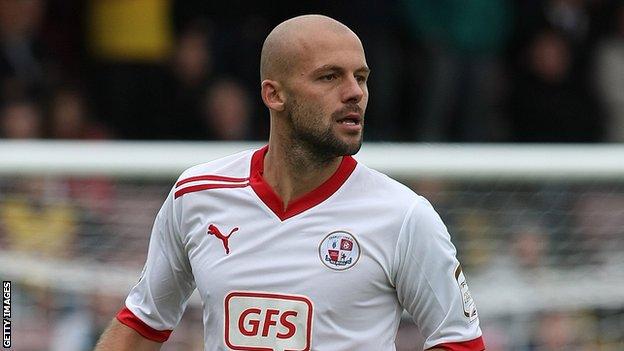 Crawley Town defender David Hunt says competition for a place in the starting line-up will benefit the club.

The 29-year-old is battling with Mark Connolly for the right-back berth.

Hunt told BBC Sussex: "After breaking my foot it was frustrating at the end of last season, especially when you lose your manager and want to impress.

"I've been working hard but I knew they'd bring in another player in regards to my situation. It's healthy to have two players in that position."

Reds boss Richie Barker has been busy in the transfer market since being appointed as manager last month.

"As it stands at the moment, the squad looks very good," Hunt added.

We are showing what we've got in this league and are playing an attractive style. The fact we can still grind out results shows we've got a good team

"If we want to get higher in the league, we will need all those bodies.

"There is near enough two players in each position and you want that if want to push up the league.

"I think we've got a lot of potential here."

Hunt has risen from Blue Square Bet Premier to the third tier with the Broadfield Stadium outfit and believes they can continue their recent success.

"You do back-to-back promotions and you think 'let's do it again' but you've got to be realistic," he continued.

"We're Crawley Town in League One.

"If we can keep chipping away getting results without many people seeing, then after Christmas time anything can happen.

"Maybe we could sneak into the play-off places. It depends how the momentum is going."