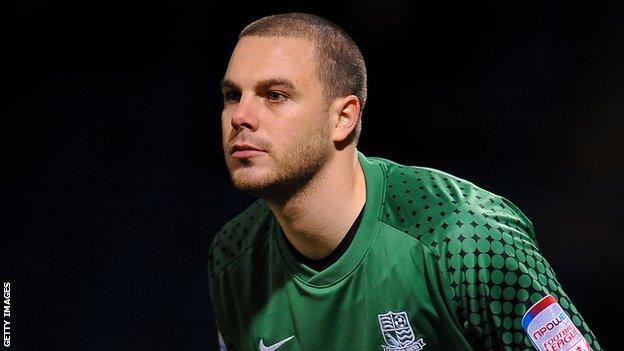 Aldershot Town goalkeeper Glenn Morris says the penalty win over Exeter City was the first time he has tasted victory in a shoot-out.

The 28-year-old saved two spot-kicks to seal passage through to the second round of the Johnstone's Paint Trophy.

He told BBC Surrey: "I don't think I've ever won a shoot-out before. I tried not to think too much as I hadn't had too much success in the past.

"I tried to go into it with an open mind and make early decisions."

Shots boss Dean Holdsworth was delighted with Morris' heroics, on what was his debut for the club.

The former Leyton Orient and Southend stopper joined the Hampshire outfit on a six-month deal this summer.

I didn't care if it was a game of tiddlywinks. I wanted to win it and I'm delighted we're through

"He knows Jamie Young will be number one and he was very eager to impress.," Holdsworth said.

"He's trained very well and was probably a bit surprised when I told him he'd be playing.

"I've got every faith in him. He's a good young goalkeeper and a good shot-stopper."

Holdsworth was relieved to get back to winning ways following three straight defeats in League Two.

"We had to respond from Saturday's defeat [at Fleetwood]," he said.

"We passed the ball really well and every player responded to what we needed.

"I'm delighted for all the players. Coming down to Exeter to win and go through is really good for the football club.

"It can only give us confidence going into Bristol Rovers.

"Their attitude was spot-on, absolutely brilliant."