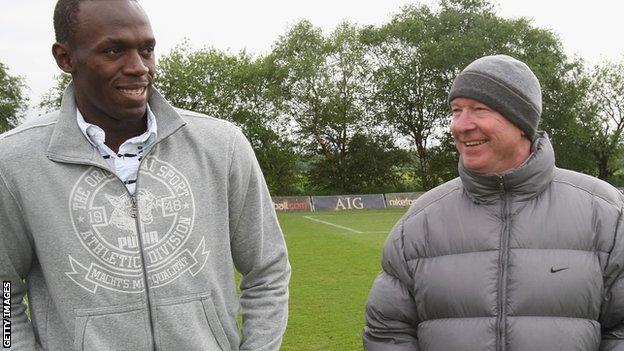 Six-time Olympic champion Bolt, 26, has joked he wants a trial at the club.

"It's interesting he says he'd like to play in a charity game," Ferguson told Inside United, the club's magazine.

"It could be brilliant and next year, when we play Real Madrid's Legends again, there could be opportunities to bring him up and see how he does."

The Jamaican sprinter called on supporters to convince Ferguson to sign him for the club as he showed off his London 2012 medals.

"He's a bit of a character and a big United fan," Ferguson said.

"The people from these small islands, like Dwight Yorke from Trinidad & Tobago, they all play football and he probably played at school level or youth level or something like that. It'd be nice to get him up here, I think it'll be good."