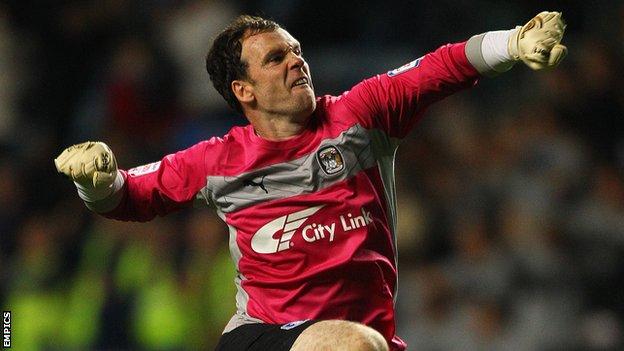 Coventry keeper Joe Murphy, the Sky Blues' penalty-taking hero in Tuesday night's Johnstone's Paint Trophy win over Burton, feels that he could have done better in the shoot-out.

Murphy hit the winning penalty in the 10-9 shootout victory over Burton, but was otherwise annoyed by his display.

"But I would have preferred had it not gone that far. I changed my mind on one or two which you should never do."

After watching 18 penalties in a row go in before his moment of glory, Murphy admitted: "It was a strange night. You rarely see penalties go that far - it was very unusual.

"For me personally, I'd fancy myself in the first five to save at least one, maybe even two. But it was a great standard and I'm sure it was great for the crowd."

Coventry are currently without a win in League One so far this season, and Murphy admits the players have no one to blame but themselves.

"It's down to us to improve and we want to achieve what we've all talked about. But to get ourselves promoted we need to improve," said the Republic of Ireland international.

"We understand that the expectation is high and we expect high standards from ourselves and we haven't reached that yet.

"When people make mistakes or do something wrong it's not nice. We've got to do better, individually and as a team."

The Sky Blues are currently under the caretaker management of Richard Shaw and Lee Carsley following Andy Thorn's departure as manager last week. But Murphy insists that the team are not worried about the managerial situation.

"We play for them and we want to do well," said Murphy. "You hear names being put in that hat but, for us, if it happens it happens."