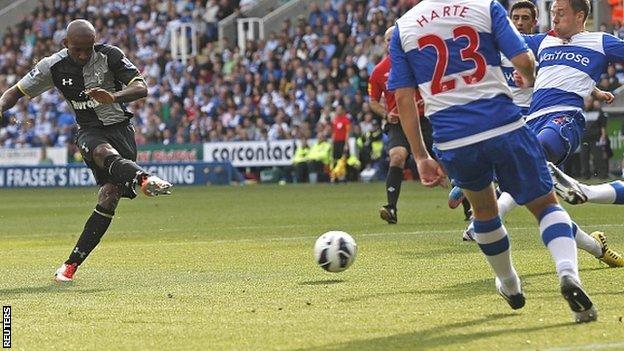 Andre Villas-Boas secured his first victory as Tottenham manager as Premier League newcomers Reading were outclassed at the Madejski Stadium.

The Portuguese has already faced questions about his future after only three games in charge - but this powerful performance and convincing win provided an emphatic response.

Jermain Defoe gave Spurs an early lead and such was the scale of their domination that Villas-Boas might have been frustrated it took until the 71st minute for Gareth Bale to double their advantage.

Defoe then concluded a 50-yard run with a powerful angled finish as Reading - overrun throughout - faded badly, even though Hal Robson-Kanu pulled a goal back in stoppage time.

It was a display that will have given Villas-Boas great heart, with Mousa Dembele and Sandro providing power and fluidity in midfield alongside another newcomer, former Reading man Gylfi Sigurdsson.

And in Defoe they have a poacher in prime form, aided by the pace and width of Bale and Aaron Lennon.

For Reading, understandably rusty after 25 days without a game, this was a chastening lesson in what will be required to survive in the top tier, although they met a Spurs team in no mood for anything other than victory after their indifferent start to the season.

Villas-Boas made good on his promise to keep faith with keeper Brad Friedel in preference to new signing Hugo Lloris - but the decision was an irrelevance throughout a first half totally controlled by the visitors.

In contrast, Reading keeper Alex McCarthy, in for the injured Adam Federici, was swiftly employed as he made a smart save from Sigurdsson's header and Jan Vertonghen's powerful follow-up.

Spurs were a constant threat and it was no surprise when they took the lead after 18 minutes. Sigurdsson's precise pass opened up space for Lennon to cross and Defoe to finish with typical efficiency.

The hosts looked overawed and elementary errors did not help their cause. Defoe stole the ball off keeper McCarthy as he dawdled in the area and it needed a rescuing block on the line from Alex Pearce to stop Sigurdsson adding a second.

Tottenham were rampant at times, playing on the break. Jermain Defoe looked very sharp, and Mousa Dembele is very physically strong. How will the Reading players react? They have to bounce back, lick their wounds and come back stronger. That's what it's all about. They will need to learn quickly, because the Premier League is a very unforgiving place.

Then Ian Harte, who had struggled to contain the pace of Lennon, carelessly presented possession to Defoe but Spurs were unable to benefit and the Royals escaped again.

Reading adopted a more attacking approach at the start of the second half with Adam Le Fondre on for Jem Karacan - but it was still the London side creating the opportunities.

Defoe held his head in anguish as a shot from Dembele struck him in the six-yard area but somehow landed the wrong side of the post with McCarthy wrong-footed.

A second goal looked inevitable and finally came 19 minutes from time when Kyle Walker broke into the area and pulled the ball back for Bale, whose half-hit finish deceived McCarthy.

And with the home side's spirit broken, the third goal followed quickly, Defoe breaking from the halfway line to outpace the defence and send a crisp finish into the far corner to put gloss on a fine Spurs performance that even the concession of Robson-Kanu's goal could not tarnish.

"I thought we were too submissive and didn't get on the ball enough or in their faces. I made some changes and we were much better in the second half.

"We came up against a very good side today and they deserved the win.

"We've got to move on very, very quickly. Today was a learning curve for all of us. Spurs is a team full of world-class performers, but we didn't cause enough problems for them, especially in the first half.

"We should have had a penalty in the first half when it was 0-0, and we scored a goal at the end. We can also draw positives from 20 minutes in the second half.

"We have a fantastic bunch of people working here and I know what I will get out of them next Saturday."

"I'm extremely happy for [Defoe]. He is such a prolific striker for club and country. It's amazing how he sniffs out goal-scoring opportunities and makes the most of them.

"I know there were questions being raised about him being played up front on his own. On his own or with Emmanuel Adebayor alongside him, I think Jermain can continue to produce these kind of attacking opportunities.

"I'm extremely happy with the performance. The players showed tremendous commitment, responsibility and concentration. They understood that we have been working so hard and they deserved to get this first win."

On perceived criticism from predecessor Harry Redknapp in a Saturday newspaper interview: "In the end it's not about the manager, it's about the players. Different kinds of managers have different leadership styles and the way they go about his business."