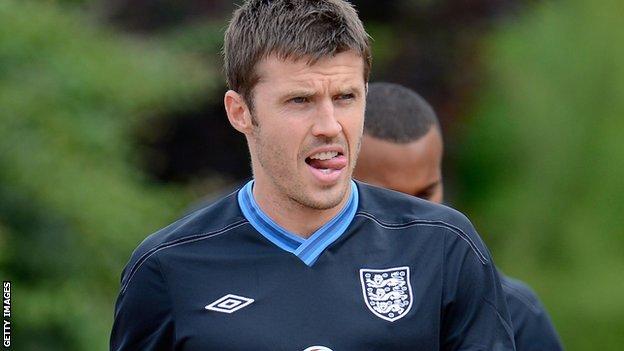 Manchester United's Michael Carrick wants to put the past behind him and concentrate on a "bright future" now he is back in the England squad.

In January the 31-year-old midfielder asked not to be considered for international duty, having not played for his country for 18 months.

But after holding talks with new boss Roy Hodgson he is now back in the fold.

"We have got some massive games ahead and I am just delighted to be here and be part of things again," he said.

"It's up to me now to play well enough to earn the right to stay in the squad and hopefully become part of the team."

Despite injuries to Frank Lampard and Gareth Barry in the build-up to Euro 2012, Carrick revealed he was never asked to be on the standby list but now just wants to concentrate on the future.

"I have explained the reasons and I think it is best for me and for everyone to move on," he said.

"I have been hugely impressed with the manager and his staff. It really is a good set-up. We had a good friendly against Italy and we just want to carry that on and keep trying to improve and put into practice the new ways the manager wants to play."