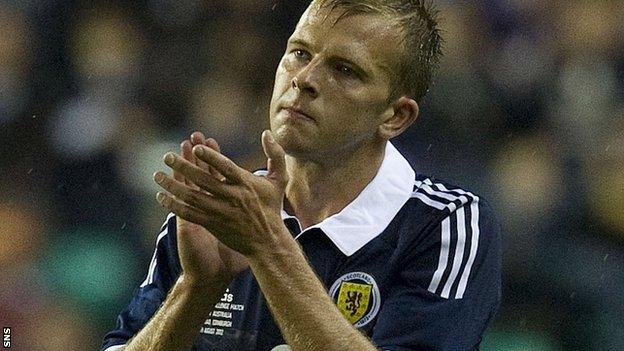 As Scotland prepare to get their 2014 World Cup qualifying campaign underway on Saturday against Serbia at Hampden, BBC Sport takes a look at the squad members who have played all of their football outside of their home nation.

Six of Craig Levein's squad have never played professionally in Scotland - with the exception of international matches - and some had never set foot in the country prior to being selected to play for their country.

Many have been selected through the tenuous "grandparent" rule, allowing national managers to choose from a wider crop of players based on family history.

Here, we cast an eye over the men who have made their names in English club football, but who could boost Scotland's chances of success on the international stage.

Gilks was born in Rochdale, but qualifies for Scotland though his grandmother from Perth - and his debut last month during a friendly against Australia. He spent the earlier part of his career with Rochadale, featuring over 160 times for the League Two side before a fruitless spell at Norwich. A move to his current club Blackpool proved more beneficial, although he has spent time on loan at Shrewsbury Town and endured a lengthy period out injured towards the end of the 2010-11 season. With Allan McGregor currently Scotland's first-choice keeper, Gilks could face a lengthy spell on the international bench unless brought in as cover for the injury-prone Besiktas goalie.

Born in Brighton, Martin makes the grade on account of his Scottish father, and first featured in the Scotland squad for the 2011 Nations Cup games against Wales and Ireland. His early career centred around his time with Brighton and Hove Albion, but his breakthrough came during a four-year period with Wycombe Wanderers, where he played over 100 matches before joining Peterborough United. His impressive form as a centre-half with Norwich since 2010 - including a solid first season in the Premier League last year - brought him to the attention of Levein as a potential star of the future. He pulled out of the World Cup qualifying squad this week through injury, hampering his chances of making a first-team start any time soon.

Morrison has played at every level for England except the main international side, but qualifies to play for Scotland through his grandparents. He first featured in a friendly against Czech Republic in May 2008 after realising that his options to play for England would be limited. His club career has been split betweeen Middlesbrough and his current side, West Brom, where he operates as an attacking midfielder or a versatile winger. Since 2008, he has made over 20 appearances for Scotland, scoring once, and is likely to become a regular feature in Craig Levein's squad during the World Cup qualifiers.

Another versatile winger, currently with Blackpool, who qualifies to play for Scotland through the grandparent rule. He earned his one and only cap against the USA earlier this year. Born in Aylesbury, he broke through at Wycombe Wanderers in 2008, then moved to Bloomfield Road in 2010, where he has featured over 60 times. He faces competition for a place in Levein's side from Steven Naismith, but at 21, he could have plenty of caps in his future if his form at Blackpool continues.

Born in Dorking and currently with QPR, Mackie has played most of his football in England's lower leagues with sides like Wimbledon, MK Dons and Exeter. However, his recent form with Premier League side QPR has brought him to the attention of Scotland manager Levein. He qualifies to play for the national side because his grandfather was born in Kilmarnock. As far back as 2010, the forward insisted he wanted to play for Scotland and was called into Levein's squad for the Euro 2012 qualifiers against the Czech Republic and Spain. He scored his first international goal in a friendly match against the Faroe Islands on 16 November 2010.

A talented striker born in Oldham who rose to prominence during a three-year spell with Huddersfield Town before joining Blackburn at the start of the current season. He qualifies to play for Levein's side because he attended school in Scotland. Rhodes earned his first call-up to the Scotland under-21 squad in November 2010, but didn't collect his first under-21 cap until March 2011. He was called into Levein's squad for the match against Cyprus in Larnaca in November 2011 and scored in his first full start against Australia last month at Easter Road. Scotland has been lacking an out-and-out goalscorer for several years, and Rhodes could be the one to fill the gap.