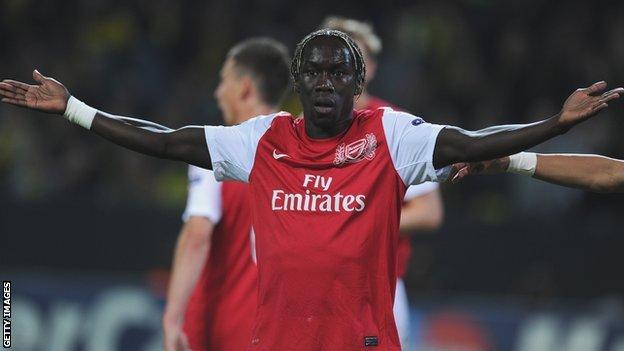 The Gunners have let and leave this summer following the exits of Samir Nasri and Gael Clichy last year.

In May, I watched Manchester City's parade on television. I watched Samir and Gael lift the trophy. It makes you want that

"I expected Robin's departure," Sagna, 29, told French newspaper L'Equipe. "But Alex, that was a surprise. He's 24 and had three years on his contract.

"When you see your two best players from last season leave, you ask yourself questions."

Striker Van Persie was sold to Manchester United after saying he would not extend his Gunners contract beyond next summer, while Song left to join Barcelona.

"In the street, supporters sometimes come to see me. I can understand that they're annoyed. I'm like them - I don't understand everything," added Sagna.

and joined Manchester City in summer 2011 and went on to help the club win the Premier League title last season.

"In May, I watched Manchester City's parade on television. I watched Samir and Gael lift the trophy. It makes you want that," said the France international.

Sagna joined Arsenal from Auxerre in July 2007 and has made 205 appearances for the Gunners, although he is currently sidelined as he recovers from the broken leg he suffered against Norwich in May.

His own contract runs to the end of the 2013-14 season and when asked whether anyone at Arsenal had spoken to him about extending it, he replied: "No, nobody."