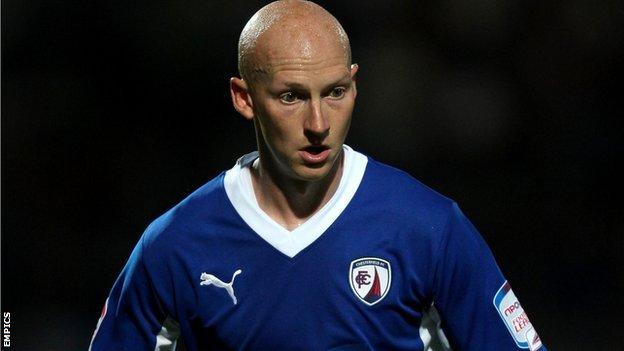 Chesterfield midfielder Danny Whitaker would like to see caretaker boss Tommy Wright given the position on a full-time basis.

Wright, 46, took over on an interim basis last week when John Sheridan was relieved of his duties.

"It was a bolt out of the blue when John got sacked but we've got two positive results in our last two games now," he told BBC Radio Sheffield.

"I know Tommy well and I'm definitely backing him for the job."

Whitaker, 31, has worked with Wright, who was Sheridan's assistant and has never managed a side, at both Oldham and the Spireites.

Chesterfield recorded their first win of the season in Tuesday's Johnstone's Paint Trophy first round tie against the Latics.

Having won the competition last year, Whitaker is keen to see the side go far again.

"We'd like to think we can go all the way again," he added.

"We had a great day out last year so hopefully we can take this into the next round and then you never know."

Meanwhile, goalkeeper Tommy Lee has been ruled out for up to eight weeks with ligament damage in his shoulder.

Lee, 26, suffered the injury in the last minutes of Tuesday's victory.