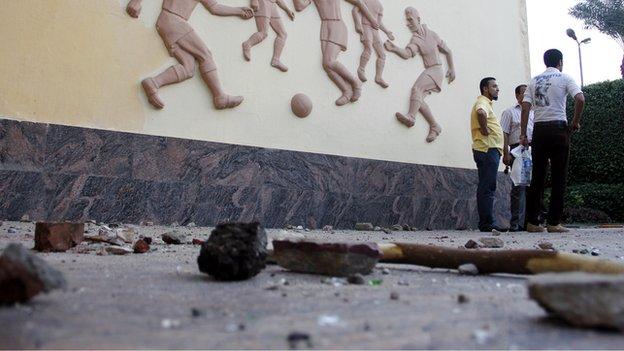 The Egyptian Premier League will still return on 17 September despite protests by fans who attacked the country's football association headquarters.

Hundreds of football fans threw petrol bombs and other missiles at the building in Cairo on Wednesday.

Al Ahly supporters are angry that the league will restart while a trial continues concerning riots at Port Said that claimed the lives of over 70 fans.

But Minister of Sports Al Amry Farouk said the league would not be affected.

Earlier this week Egypt's Ministry of Sport had announced an end to the ban on domestic football that had been in place since the stadium disaster in February at Al Masry's home match against Al Ahly.

While many had welcomed the news, especially after two previous proposals over the resumption of the league had been rejected, some Al Ahly fans are upset at the decision.

A section of the club's supports, named the Ahly Ultras, invaded the club's training session on Wednesday, before heading next door to the EFA headquarters, where they caused serious damage to the property.

There are also reports that several important trophies were stolen.

It is believed the fans do not want the league to return before they claim the rights of their victims.

It is also understood that they do not want Al Ahly to take part in the new season and have called for the club's board to resign.

Al Masry have agreed not to participate and will miss the season, instead they will return in the 2013/14 campaign.