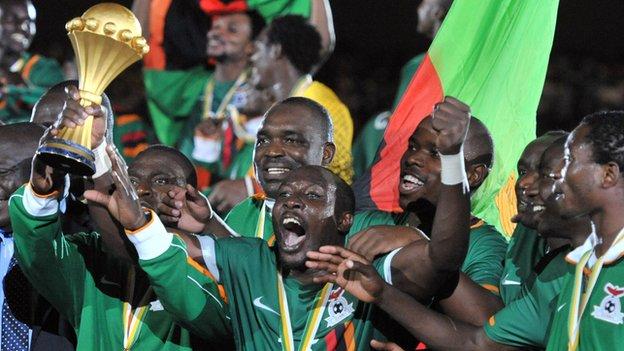 Christopher Katongo's first-half strike has handed the reigning champions a slender advantage ahead of what will surely be a tough return leg in Kampala.

Uganda threatened little and will feel relieved to head home trailing by just the one goal.

Katongo had an effort ruled out for offisde. The Chipolopolo also hit the post during a long spell of domination, as they went hunting for a second.

Uganda have not lost at home since 2004. This tie is far from over.

Burkina Faso will have to come from behind in their final round qualifier for the 2013 Africa Cup of Nations after losing 1-0 to Central African Republic in Bangui on Saturday.

'The Stallions', who have been regular participants at AFCON tournaments in recent years, succumbed thanks to a first half goal from the host team's Vianney Mabide.

They will try to turn the tie on its head in the second leg in Ouagadougou next month.

For CAR, who shocked former African champions Egypt in the previous round, this result puts them on course to qualify for their first ever Nations Cup finals.

A late equaliser from Emmanuel Adebayor - on his return to the Togo team - gives them the upper hand after a dramatic finale in Libreville.

Meeting for only the second time in a competitive fixture, the 2012 co-hosts Gabon proved stubborn opponents and did well to initially keep the Sparrow Hawks at bay.

It was Gabon who finally broke the deadlock, when veteran striker Daniel Cousin powered in a header with around 15 minutes remaining.

But Adebayor, back after yet another self-imposed exile, struck moments later to set up an intriguing second leg in Lome next month.

A goal in each half handed the Black Stars a comfortable victory in Accra, leaving Malawi with much to do in the return leg.

With Malawi sitting deep and seeking to soak up Ghana pressure, the hosts were made to work for their second, which fell the way of Anthony Annan only six minutes after the interval.

Malawi's cause was not helped when James Sangala was dismissed in the latter stages, and they now face a big ask if they are to reach the Cup of Nations finals for only the third time in their history.

Asamoah Gyan captained the side in his first appearance since returning from a self-imposed break.

Tunisia twice came from a goal down to severely dent Sierra Leone's hopes of reaching their first Nations Cup finals since 1996.

The Leone Stars led through Azerbaijan-based Sheriff Suma after only seven minutes.

They held that advantage until midway through the second period, whereupon Fateh Gharbi beat Christian Caulker with a left-foot shot following a fine move.

Alhassan Kamara headed in what he felt must have been the winning goal just five minutes before the end, only for Youssef M'sakni to equalise two minutes later.

Ivory Coast came out on top in the clash of the titans but they had to twice come from behind against a determined Senegal.

A late surge by the Ivorians - beaten finalists earlier this year at the 2012 Cup of Nations - ensured they go to Dakar for the return leg with a bit of breathing space.

Dame N'Doye opened for Senegal, before Salomon Kalou punished the visitors just before the break to level matters.

The home crowd was hushed once again when Papiss Cisse hit Senegal's second on the hour mark, before the Elephants stormed back with goals from Gervinho, Didier Drogba (pen) and Max Gradel.

Drogba also had a late goal disallowed for handball.

Cape Verde recorded arguably one of their greatest-ever results as they triumphed 2-0 at home to the four-times champions Cameroon.

The second leg awaits, but goals from Ricardo - his first at international level - and Djaniny will have the minnows believing that they can reach the Cup of Nations finals for the first time in their history.

Without Samuel Eto'o, it seems, Cameroon are finding goals hard to come by, but it is goals they so desperately need in the return leg if they are to avoid missing successive Nations Cups for the first time since 1980.

Mali trounced Botswana 3-0 in Bamako on Saturday to give themselves a great chance of making it to South Africa next year.

France-based Cheick Diabate put the home side in front after 27 minutes when he converted a penalty, before Mahamadou Ndiaye added a second just before the hour mark.

Modibo Maiga sealed victory 20 minutes from time as Mali's superiority in all areas of the game left the Zebras chasing shadows.

A three-goal cushion means the Eagles, who finished third at this year's finals in Equatorial Guinea and Gabon, head into the return leg in Gaberone with no major fears.

For Botswana, the result was another reality check for a team that made its debut at the continental showpiece this year and promised to do it again in South Africa next year.

Sudan and Ethiopia rolled back the years in a match full of goals and packed with drama.

It took just seven minutes for the opening goal to arrive, driven in from Mudather El Tayeb Karika.

That set the tone for a pulsating display of attacking football, one in which Ethiopia certainly played their part.

The visitors were level within seven minutes, as Getaneh Kebede got in on the act.

Ethiopia snapped back at Sudan after the break, with goals from Kebede and Tesfaye Alebachew to make it 3-3, before two late strikes from Muhannad El Tahir.

El Tahir's first was a converted penalty. His second, and Sudan's fifth, was a follow-up, after his initial spot kick had been blocked.

Liberia and Nigeria played out a 2-2 draw on a bumpy pitch at the Samuel Doe Stadium in Monrovia.

Omega Roberts stunned the Super Eagles with a goal after just eight minutes.

But the lead was short-lived as Nosa Igiebor found the equaliser just six minutes later.

Ike Uche then put the visitors in front from the penalty spot after the impressive Victor Moses was brought down inside the box.

A goalkeeping howler by Vincent Enyeama allowed Sekou Oliseh to score Liberia's second deep into the second half.