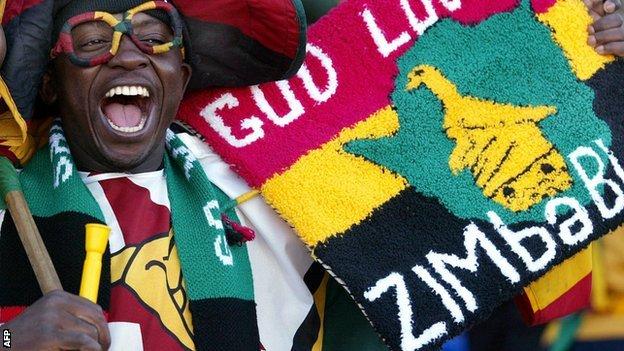 Gustavo Ferrin's first competitive match in charge of Angola was not a happy one as Zimbabwe took a giant stride toward South Africa 2013 with a 3-1 home win.

It could have been even worse for the visitors, but for Djalma's goal just after the interval.

By that stage, the Warriors were already 3-0 up, thanks to an own goal from Bastos, and further efforts from Khama Billiat and Archford Gutu - all before half-time.

Zimbabwe last appeared at a Nations Cup finals in 2006. Angola did manage an away goal, just to keep things interesting for the return leg in Luanda.

Mozambique caused one of the big shocks of the weekend with a 2-0 home win over the 2004 runners-up Morocco.

Second half goals from Almiro Lobo and Elias Pelembe have given Mozambique every chance of qualifying for only their second Nations Cup finals in the last eight attempts.

Morocco, since finishing second to Tunisia eight years ago, have failed to get beyond the group stage in three tournaments, whilst missing out on the 2010 edition altogether.

The 2012 Nations Cup co-hosts were blown away by a storming second half from DR Congo, who were in complete control of this first leg in Kinshasa.

Dieumerci Mbokani (2), Deo Kanda and Issama Mpeko grabbed the goals, as DR Congo closed in on a return to the Nations Cup finals for the first time since 2006.

The last time they featured at the continent's top tournament, Claude Le Roy was in charge. The much-travelled Frenchman is back at the helm and his influence seems to be working wonders.

DR Congo's players are also US$200,000 better off as the president of club side TP Mazembe, Moise Katumbi, is reported to have promised the team US$50,000 for each goal.

This tie is far from over after Guinea could only manage a 1-0 win over Niger in Conakry.

Niger, who made a disappointing debut at the Cup of Nations earlier this year, will remain confident of reaching a second successive finals.

Ibrahim Yattara was the Guinea scorer. He netted five minutes after the break, following some good work down the left by Stuttgart's Ibrahima Traore.

Ugly scenes marred the end of this contest, which was played in the Moroccan city of Casablanca, due to ongoing security concerns in Libya.

Players and officials from both sides became involved in fighting at the final whistle, which does not bode well for what is sure to be a tense second leg in Algeria.

Algeria left it late to snatch an away goal. Hillel Soudani, who plays his club football in Portugal, pounced with just three minutes remaining.