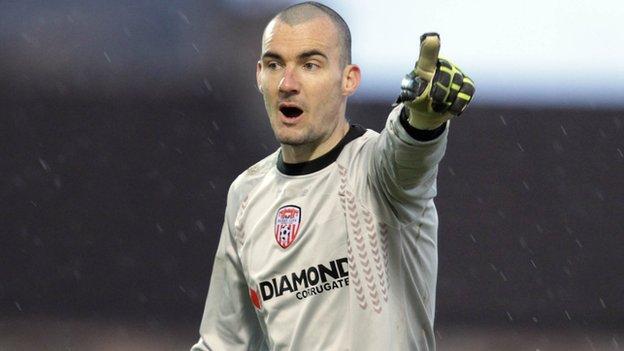 Garry Buckley's second-half header gave Cork a Premier Division victory over the Candystripes at the Brandywell.

Cork scored the only goal on 68 minutes with Buckley heading home from a corner and the Leesiders held firm as Derry pressed for an equaliser.

City's Ryan McBride was red-carded in injury time for a rash challenge.

Cork have moved to within two points of fifth-placed Derry after an entertaining league encounter.

Doherty's save was the highlight of the first half, the City stopper pushing Duggan's header over the bar.

Vinny Sullivan squandered Cork's best opening when he shot wide while Derry strikers David McDaid and McLaughlin had efforts cleared off the line.

Buckley netted from Kevin Murray's knock-down while Barry Molloy headed over as the hosts chased a late equaliser.

McBride was shown a straight red in the foruth minute of added time following a tackle on Buckley.