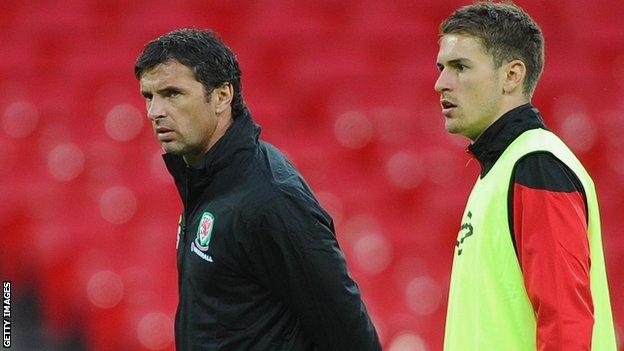 Aaron Ramsey says Wales will by spurred on by the memory of late manager Gary Speed in their 2014 World Cup qualification campaign.

Wales kick off their Group A campaign against Belgium in Cardiff on Friday.

"We still want to do it for him [Speed] and what he started here, and for ourselves and every Welsh fan and Welsh person," said Ramsey.

"Hopefully, we can do something special."

I am confident in what we can do and with the fans behind us, being at home and anything can happen

Speed made Ramsey Wales's youngest-ever national captain at the age of 20 years 90 days, beating the record set by Mike England in 1964.

The 21-year-old Arsenal midfielder, who played for the Great Britain Olympic side in London 2012, had a close relationship with his former manager.

Speed, who was found hanged in tragic circumstances at his home, had hoped to become the first Wales manager to qualify for a major tournament in 54 years.

Speed guided his side to three successive wins and his last game in charge had been a 4-1 victory over Norway before he was succeeded by Chris Coleman.

"He [Speed] started us playing some good stuff," said Ramsey.

"We had some great results under him and played a way we all enjoyed.

"Everyone wanted to be here and it was a good atmosphere. This was his target, this was our target - to qualify.

"Everything, all the games which we played prior to this was to get us in the best possible shape to give it a really good go."

Coleman is still looking for Wales to score the first goal of his reign that has brought three defeats in his first three games in charge.

Belgium lie just five places above Wales in the latest Fifa world rankings, but the home side head into the fixture with a host of injuries, with Craig Bellamy, Neil Taylor, Andrew Crofts, Wayne Hennessey, Joe Ledley, David Vaughan and Jack Collison all sidelined.

But Ramsey is confident a depleted Wales can deliver the goods against a talented Belgium side which includes Premier League stars such as Everton's Marouane Fellaini and new Tottenham signing Mousa Dembele.

"It's the first game in the group and you want to get a good result and hopefully we can get back to where we were," said Ramsey.

"I am confident in what we can do and with the fans behind us, being at home and anything can happen."