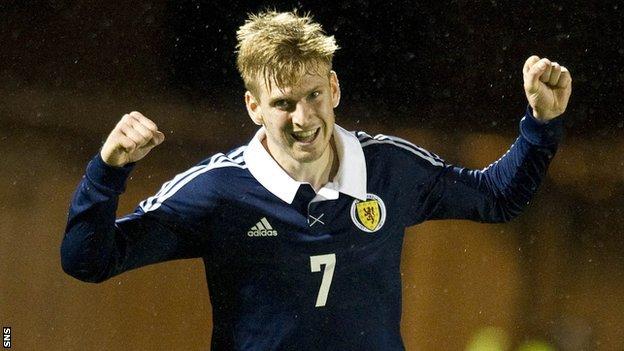 Scotland's Under-21 side maintained their hopes of reaching the European Championship play-offs with a comfortable victory against Luxembourg.

The Scots struggled to create openings in the first half, with Johnny Russell's shot the only chance of note.

However, the breakthrough came with Stuart Armstrong's composed finish in the 63rd minute.

Billy Stark's side move to within three points of Group 10 leaders the Netherlands, who need only a point from their final qualifer against Austria on Friday to finish as section winners.

However, should Scotland, who complete their group campaign in Austria on Monday, finish level on points with the Dutch, Stark's team will finish top and progress to the play-offs due to a better head-to-head record.

The four best second-place teams will join the group winners in the play-offs.

At St Mirren Park, Russell's fierce low drive was touched out by Luxembourg goalkeeper Philippe Hahm early on but Icelandic referee Thorvaldur Arnason did not see the keeper's fine save and awarded a goal kick.

Hibernian teammates Griffiths and Hanlon were involved in Scotland's first meaningful attack of the second half as the former's free-kick was beaten out by Hahm to Hanlon, who could not keep his rebound effort down.

But the Scots kept pressing and took the lead with Armstrong's strike.

The Luxembourg defence struggled to deal with the advances of Griffiths and Russell and the ball broke to the Dundee United midfielder, who calmly placed a shot into the net from outside the area.

And Scotland were soon two ahead as Russell squared for Griffiths and the former Dundee striker finished high past Hahm.

Griffiths made way for Watt and the Celtic forward won a spot-kick when he was fouled by Dzenid Ramdedovic.

And Watt claimed his first under-21 international goal with a confident finish from 12 yards to complete Scotland's win.